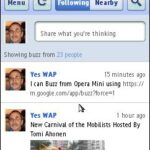 Google’s Buzz has certainly generated a lot of negative reactions around the web over privacy issues and the fact that many Android users were denied access to it. Google has been in damage control mode ever since the Buzz launch and has made some changes that go a long way to answering both criticisms. The privacy issue was obviously the more serious.  A lot of  Gmail users felt that their privacy had been violated by Buzz’s auto-follow feature that defaulted … Continue reading →