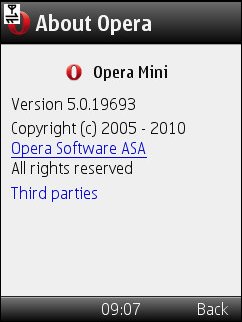 Today the Opera Mini Blog announced a “silent” release of Opera Mini.  I’m not sure how anything announced on the corporate blog is silent, but no matter this appears to be a pretty significant release. It adds 32 new languages and fixes several notable bugs, specifically:

I know that the RTL bug fix will be especially appreciated by the millions of Opera Mini users who were unable to use Opera Mini in their native languages.  The text input bug was also a show stopper for users of some handsets who could no longer type in text fields after enabling Opera Link. The addition of 32 more languages brings the total number of languages and dialects supported by Opera Mini to over a  hundred!

The update only affects the Java ME and BlackBerry versions of Opera Mini 5, the iPhone, Android and Windows Mobile native  clients are unchanged. It bumps the  build number of the English Java version from 18741 to 19693.

Get the latest Opera Mini release by visiting m.opera.com with your phone’s browser or
opera.com/mobile/download with a PC.  Upgrading should retain your existing bookmarks and settings on most phones, but if it doesn’t there’s always Opera Link.

I’ve been very pleased with Opera Mini 5’s performance  lately and am using it as the main browser on my Nokia N95.  There was a period last month where the Opera Mini servers were misbehaving rather badly, frequently silently failing to post web form input or reloading the current page when trying to follow a link. But it looks like those problems have been largely eradicated by some recent server side updates.