One thing that’s been holding back the adoption of  mobile web services in the US is the lack of affordable data,  or in some cases,  any data at all on prepaid mobile plans.  It looks like that is about to change with both T-Mobile and Sprint expected to roll out new data options for prepaid users this month. 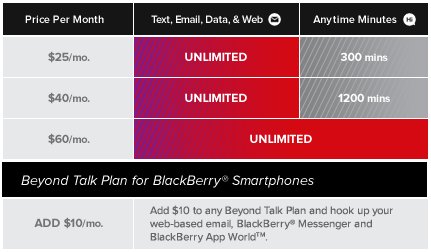 Sprint’s new offer looks pretty good.  Starting May 12th, you will be able to sign up for a new “Beyond Talk” plan offering unlimited data, unlimited texting and 300 voice minutes for $25/month.  If you need more minutes, $40 gives you 1500 minutes plus  unlimited text and data and for $60 you get unlimited voice, data and text. Unlimited mobile to mobile calling (between Virgin Mobile phones) is also included. These plans can be used with any Virgin Mobile handset and with four new  Beyond Talk exclusive QWERTY devices, the $149.99 3G LG Rumor Touch, $89.99 Rumor 2 slider, $69.99 Kyocera S2300 and the $299.99 BlackBerry Curve 8530 with 3G and WiFi.  Plan prices for the BlackBerry are $10/month more than for the other phones but that includes BlackBerry BIS, which enables BlackBerry push email, PIN messaging  and Facebook and IM clients.  Full Blackberrry service on a nationwide network for $35/month, compared with at least  $60/month everywhere else, makes this an unbeatable deal for CrackBerry addicts who don’t talk a lot.

The   new plans and phones are now available on the Virgin Mobile website.  It looks like the feature phones come with Opera Mini preinstalled and have browser shortcuts  to Facebook and MySpace and with the Rumor Touch, Twitter on the homescreen.  Traditionally Virgin Mobile has not allowed the installation of 3rd party apps from off-portal sources on their phones.  I’m pretty sure the new BlackBerry is exempt from this restriction but I don’t know about the others.

Great pricing, but, except for the ‘Berry, the device offerings are rather meah.  That’s one thing I really hate about CDMA,  operators have absolute control over which devices they will activate on any plan or package.  There’s another thing about the new pricing that seems off. At $60 the Virgin unlimited offer is $10 more than an identical unlimited deal from Sprint’s other prepaid division, Boost Mobile CDMA.  Virgin and Boost use the same network with the same coverage . Plus, unlike Virgin, with a bit of social engineering its even possible use many Sprint branded handsets, even Windows Mobile and legacy Palm OS ones, on Boost.

Sprint is establishing itself as the data value leader on contract plans too with a $15/month unlimited data addon  for most smartphones instead of the $25 on T-Mobile charges or $30 on AT&T and Verizon.

As for T-Mobile, while not officially announced, according to a leaked image of  a training PowerPoint,  the carrier will also launch a couple of attractive new prepaid options on May 16th; unlimited voice and text for $50/ month and unlimited text combined with $0.10/minute voice for $15 /month.  Coincident with the new plans T-Mobile will also finally give all pay as you go customers an option for prepaid data beyond the free but limited walled garden that they have offered for years. Unfortunately T-Mobile’s new prepaid data pricing is absolutely obscene – $0.99/hour! That might be useful for occasionally bringing up a Google Map when hopelessly lost or accessing some vital piece of web information in a pinch. But at $713 for a month of unlimited service it’s totally impractical  for the sort of around the clock access to  Facebook, Twitter, push email and sync services that the modern mobile lifestyle demands.  Given that T-Mobile gives prepaid Sidekick users unlimited data for $1/day and offers contact customers unlimited data for $10/month on feature phones or $25/month on smartphones I don’t understand this pricing from T-Mobile, tradionally the best value US operator. I’m really hoping that $0.99/hour is a mistake and Magenta actually meant a $0.99 per day.

Unlike T-Mobile’s awful prepaid data offer, Sprint’s  is a very good value and should do a lot to replace some of the six million customers that the carrier has shed over the last three years.  Even while experiencing subscriber loses Sprint has been building out it’s network with new towers and ever increasing 3G  coverage.  I suspect that there is a lot of unused data capacity on the Sprint network, something that can’t be said for AT&T.  Do Verzion and T-Mobile have the bandwidth and the will to counter Sprint’s latest offers with some good prepaid data deals of their own?  I hope so, prepaid is the future of mobile in the US with over half of all new mobile subscribers now choosing no contract plans.  There’s got to be a huge demand for affordable prepaid data as well and Sprint seems best positioned to take advantage of that growth oportunity.