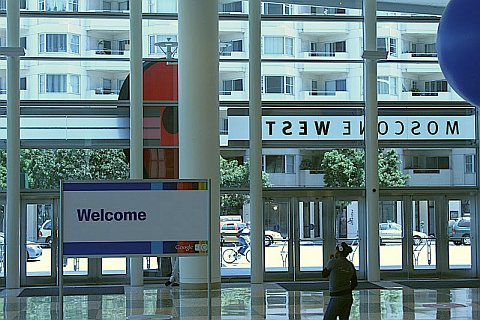 The big Google I/O developer event kicks off in San Francisco tomorrow. WapReview will be there trying to learn as much as possible about what Google will be doing in mobile, especially in mobile webapps and services. Watch for live updates from the keynote tomorrow on my @Yeswap account on Twitter and for a daily wrap up here on WapReview.com

I expect to see some big announcements in the mobile web services area. Likely candidates include something in the mobile social area, perhaps general availability of Wave with a full featured mobile web Wave client. Maybe something even bigger like a new service merging Wave with Latitude and/or Buzz to create a rich location enabled social messaging and sharing platform to compete more effectively with Facebook, Twitter and FourSquare.

There’s a persistent rumor that something big will  be announced regarding App Engine.  I’m hoping it’s PHP support. PHP is by far the most popular language for server side devlopment on the web,  including the mobile web. The ability to use PHP would give a huge boost to App Engine adoption.

With Microsoft releasing a free web based office suite next month, there will likely be some significant Google Docs announcements at I/O. I hope these will include enhancements to mobile web version of  Google Docs like adding the ability to create and edit word processing documents on mobile.

It seems almost certain that Android 2.2  (Froyo), will be released in some form at the conference. I expect that the 2.2 SDK will be  made available. I wouldn’t be surprised to see a 2.2 upgrade for one of more phones and perhaps even a brand new phone launched with 2.2.

Froyo is particallry interesting to me as it’s is supposed to include some signifigant browser enhancements including a fix to the caching issue that causes pages to reload when switching browser tabs or between the browser and another app.  The 2.2 browser will also  finally support “browse for file to upload”  buttons on web pages and probably more HTML5 goodies as well.

The biggest Android browser news will be full desktop Flash support.  No matter what you think of Flash, it’s not possible to fully use the web without it today.  If Adobe and Google can make Flash fast and stable on Android it will be a huge selling point against the iPhone.

The rumor mill has been running overtime for I/O, among the more interesting rumors are an  Android or Chrome Tablet and set-top TV box running Android.  Whatever is announced tomorrow and Thursday, I expect it to be big so follow @Yeswap for all the updates starting at 09:00 PDT (16:00 GMT).