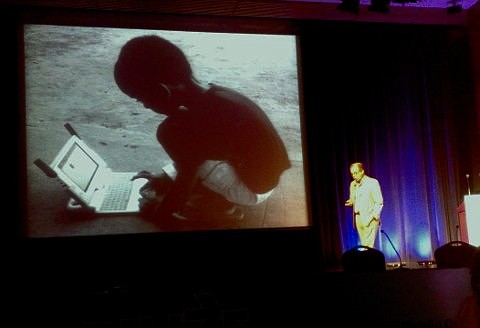 I heard Nicholas Negroponte speak at Mobilize today.  It was a zinger of a talk. He started by saying that since its founding in 2001, One Laptop per Child’s goal has been to deliver enabling technology in and only in areas where market forces couldn’t or wouldn’t.

Although he started with laptops, Negroponte now believes that tablets are the best, most cost effective tool  for enhancing learning everywhere in the world.

Negroponte’s described his ideal tablet as:

He stressed the importance of design. We need designs that facilitate creating content. People learn best by doing, and creating rather than just reading. Calling Apple’s business model, “making peripherals for iTunes”, he said his is creating tools to unleash creativity in China, in Africa and everywhere.

I like Negroponte’s tablet concept; inexpensive, transflective screen, uses available connectivity but useful without it, favors creation over consumption.  I also think the concept shares a lot with the way mobile phones are evolving. The OLPC tablet is a lot like a large but basic touch screen phone with a  lean and efficient  operating system. Whether or not it includes a cellular radio it could be built using a lot of mass produced mobile phone hardware and software, which thanks to volume, would help OLPC meet its low price goals.

The question is, who will build it. Negroponte was vague about if or when his tablet would be available. A prototype exists but he seemed wary of being a hardware vendor again and now sees his role as creating designs for others to build.