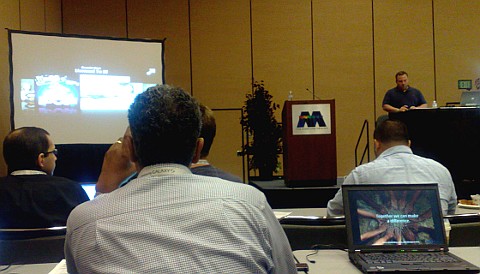 I attended the Nokia Developer Day session  CTIA today.  The day long event started with  a mind boggling assortment of numbers demonstrating the the revenue opportunities that Nokia offers developers.

Nokia’s much maligned Ovi Store as been redesigned  for better usability and app discovery. The improvements seem to be working. Traffic and downloads are up. The average visitor downloads 2.6 apps per visit, 8.5 per month for a total of 2.5 Million downloads per day.  85% of Ovi Store visitors are repeat visitors

The Ovi Store now supports over 190 countries, 135 devices and 30 languages. Through the store developers can target over 500 million active S40 and 175 million Symbian phones. Operator billing is now available on 91 operators including AT&T and  T-Mobile in the US and Bell, Rogers and Telus in Canada.  With purchases made using operator billing, the Ovi store gives developers an unprecedented  60% of the selling price. Nokia claims that app sales increase by 13 times when operator billing is available. Also, In-app purchasing is coming to  the Ovi Store as a Beta in December.

Nokia seems to finally be getting serious about North America with a planed 500% increase in its North American marketing and advertising budget for 2011. Nokia announced that the C3 is coming to AT&T as $70 prepaid phone and that T-Mobile has started offering the touchscreen Symbian 5230 Nuron to prepaid customers for $129

Next up came a high level overview of Nokia’s three main development platforms;  Qt, WRT and Java ME.

Qt gives C++ developers the full power of Symbian including access to all APIs without most of the arcane constructs and steep learning curve of traditional Symbian native development. Nokia estimates that Qt  reduces the lines of code required to develop a typical app by 70%.

On the Java ME side, Nokia has released a new Java API that supports touch and gesture events on the new Nokia Touch and Type phones. I played briefly with the X3 Touch and Type phone and found it much nicer than I expected. Super thin, small and cute, the X3 has a WebKit based browser and a surprisingly responsive touchscreen

Another plus with publishing in the Ovi Store is that Nokia is offering all developers free Symbian Signed and Java Verified certification for native Symbian, Qt, WRT and Java ME apps. The approval process is supposed to be have a minimum  of red tape and a five day turnaround.

As a final incentive, every developer present at the end of the event received an “Nokia N8 Developer Pack”;  a rather nice laptop bag containing a USB key, t-shirt and an N8 to help them get started with developing for Symbian^3. 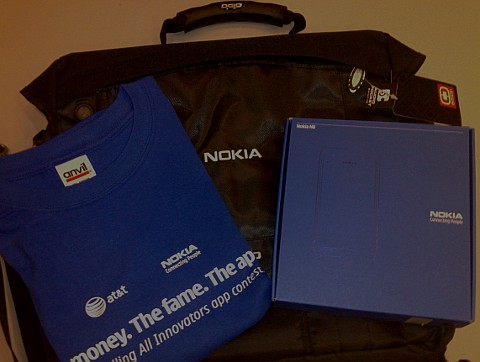