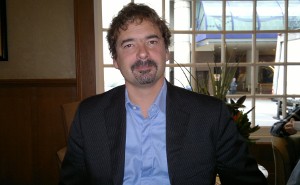 I spoke with Opera Software co-founder Jon von Tetzchner at CTIA today. Yesterday Opera announced that it had joined Adobe’s Open Screen Project, which aims to increase the use of Flash on all devices including mobiles.  I asked Jon what the alliance with Adobe would mean for Opera Users. He pointed out that Opera had long supported Flash in its desktop browsers, the Nintendo Wii browser and with Opera Mobile on Windows Mobile. He said that  Open Screen Project membership will help Opera to improve the compatibility of its products with Flash and enhance the user experience.

Jon talked a bit about Opera’s support for web standards. Opera is one of the founders of the WHATWG, the group responsible for HTML5. It is a strong proponent of HTML5, CSS3 and SVG, believing that these technologies are turning the browser into a powerful runtime environment for webapps including games and animation. Jon said he is proud of the support Opera gives to the W3C and other standards bodies. Opera believes standards are a key to achieving it’s goal of the web on every device, everywhere.

We also talked about Opera’s new mobile advertising platform, Open Mobile Ad Exchange which was announced earlier in the week. It can deliver ads to any mobile browser that supports JavaScript but is particularly aimed at publishers and advertisers who want to reach Opera Mini’s 65 million global users. The ads display in a participating publisher’s web page as with other ad networks and not in Opera Mini itself.

Unlike most mobile ad platforms, Open Mobile Ad Exchange can be used on both mobile formatted and desktop pages.I think its  greatest value will be to publishers of desktop web pages. Opera Mini and other modern full web browsers are so good at rendering any web content that their users tend to prefer and use desktop pages rather than mobile formatted ones. Traditional desktop advertising platforms like AdSense typically don’t work in Opera Mini, depriving publishers of potential revenue.  Open Mobile Ad Exchange solves this problem.

I asked Jon about future Opera Mobile and Opera Mini releases and features. Opera has policy of not pre-announcing new products and upgrades so I didn’t expect him to answer. And he didn’t other than to say that there are several very exciting products in Opera’s pipeline.