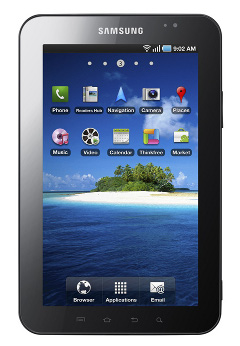 Yesterday’s “iPad and Tablets: Publishing and Entertainment” sessions at CTIA were an interesting experience. The main thing I took away from them is that some smart people with extensive mobile and computing industry experience believe tablets will be very big and will eventually largely replace netbooks and PCs.

That was the message from several of the speakers including Zigurd Medniks who works with OEMs to adapt Android to a wide variety of devices and embedded systems. The reasoning is that the tablet form factor has a lower production cost than any other device design. Tablets will soon be really cheap to mass produce. Completion will drive the cost of screens and mobile CPUs down to commodity levels. Cheap components, a simple slab of plastic case, lack of moving parts and free open source OSs like Android, Chrome and MeeGo that OEM’s can tweak and modify mean low  barriers of entry for device manufactures. Competition will drive the price of a capable tablet down to about $130 and possibly less. The price of connectivity may actually be a bigger issue than the cost of the hardware.  I expect that these low cost tablets will be WiFi only devices connecting to the cloud intermittently at home and public hotspots.

These cheap tablets won’t be particularly powerful but they will be powerful enough for the majority of PC users who use their devices largely for content consumption and a little lightweight content creation like note taking and email.

What will this new breed of tablets look like? They are likely to be smaller than the iPad. Another speaker, Dr. Phil Hendrix, does mobile market research. His studies indicate that potential tablet buyers are evenly split between 7 and 10 inch screen sizes with a smaller but still significant number preferring 5 inch tablets.

I got a bit of hands on with both the 7 inch Samsung Tab and the 5 inch  Dell Streak here at CTIA. They’re both a lot more portable than the iPad.  The Streak will  just barely fit in a jeans or inside jacket pocket. The Tab fits an outside jacket pocket but you probably wouldn’t want to carry it there if only for fear of cracking the screen.  At 13 ounces, the Tab is significant lighter than the 24 oz. iPad.  It’s a lot thiner too and will easily fit in a mid sized purse or small backpack.

The only Streak I could find appeared to have a dead battery so I couldn’t actually try it out but the Tab was very much alive with a gorgeous screen and very snappy response to tapping and swiping.  It was running Froyo and contrary to some rumors I heard has the full Google experience with the Android Market, Gmail, Maps and  YouTube apps installed and working. The pricing for the Tab has not been announced but if Samsung is smart they will release the Tab at a lower price point than the iPad.  They also need to work with the operators to match AT&T’s aggressive 2GB for $25 pricing for iPad data.

I look at the Tab and Streak as prototypes of the coming wave of incredibly cheap commodity tablets that will conquer the commuting world.

One thought on “CTIA: The Coming Tablet Revolution – It’s Not About the iPad”