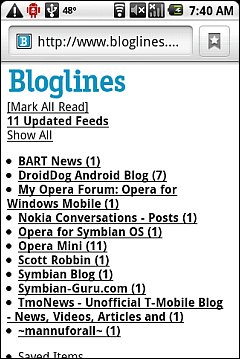 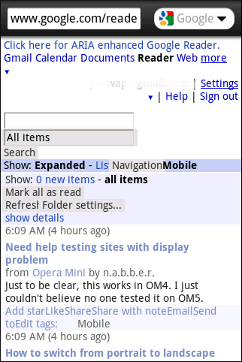 I’ve been using Bloglines Mobile (image top, left) in Opera Mini for over five years  to keep up with over one hundred mobile bloggers and forums.  It was an awesome combination, I could read my 170+ feed subscriptions with it in Opera Mini on a 2G feature phone faster than I could with Google Reader on the desktop. Plus, Opera Mini let me save  all my unread items as a single page for off-line reading.

Bloglines has been dying a slow death ever since IAC bought it in 2005. Earlier this year IAC announced that they were going to shut down the service in September.  After a couple extensions of the deadline Bloglines was  “saved” when Merchant Circle , a social network for small businesses, acquired the brand.  Initially we were told that nothing would change under the new ownership.  Then early in December Merchant Circle let it be known that  Mobile Bloglines, the only part of the service I used, was not going to be retained and that users would need  to migrate their feeds from the “old” to the “new” Bloglines.

I held out  hope that the desktop version of the new Bloglines would still be somewhat usable in one or more of my mobile browsers so I went ahead with the mandatory migration.

Migration did not go well, with Bloglines reporting that over two thirds of my feeds did not migrate automatically.  I was supposed to be able to migrate the others manually by clicking on each one in a list and then clicking a confirmation dialog for each.  The manual migration failed with a timeout error on the first few feeds I tried and I gave up thinking I would try again latter. When I did  I couldn’t find a way to restart the migration or to get back into the “old” Blogines, which is supposed to be up until the end of the month, to export an OPML file.  Fortunately, I did an export less than a month ago so I only lost a few subscriptions.

The new Bloglines (image, below) which is “powered by NetVibes” seems nice enough on the desktop but is completely unusable in Opera Mini and Mobile and with the Android and Symbian browsers.  While I appreciate Merchant Circle’s rescue of Bloglines, in its present form it’s not useful to me. 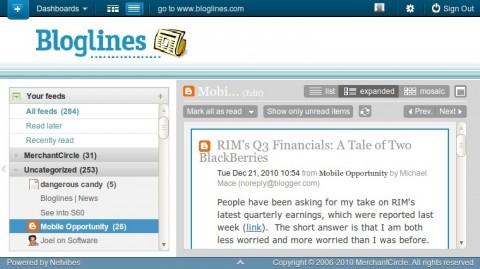 I’ve switched to using the Google Reader Wii channel in Opera Mini Mobile View hack (image top, right) that I wrote about when the closure of Bloglines was first announced.  It’s not perfect, formatting is ugly and it’s too easy to accidentally activate a link scrolling the list.  Plus, Reader will paginate the item list if there are more than 50 items and loading subsequent pages of items seems unreliable in Opera Mini.

Still, I’m going to miss Bloglines Mobile.  It was without a doubt the fastest and easiest way to keep up with your own personalized river of news. If by some miracle it were revived I switch back to it in a heartbeat.

Related Posts:
Why I Still Use Bloglines
Google Reader’s Wii Version Is My Bloglines Mobile Replacement

One thought on “Moving On From Mobile Bloglines”