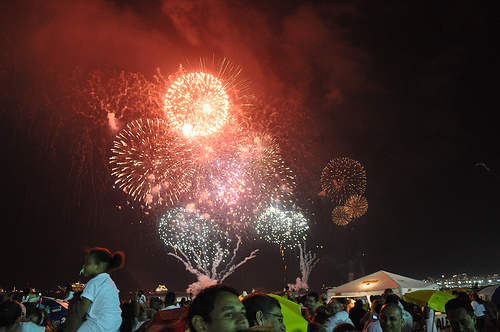 Photo by over_kind_man – Some rights reserved

Now that the year is over it’s time to look back at the predictions I made a year ago and compare them with what actually happened with mobile browsers,  web apps and  platforms in 2010.

Prediction: There will be major improvements in smartphone mobile browser technology. Mozilla, Opera, Nokia, Skyfire, Google and RIM will compete to deliver a near desktop experience on high end devices. Expect to see better and faster JavaScript engines and increased support for HTML 5’s offline storage, geolocation, SVG and video features.  Desktop level Adobe Flash support will also appear on most smartphone platforms, although probably not on  the iPhone.

But mobile Flash has mostly been a bust. Adobe has been promising a full desktop Flash mobile player or plug-in for all the major smartphone platforms “next year” for at least a couple of years. Flash 10.1 did finally make it to some high end Android 2.2 phones in 2010 but reviewers generally found it sluggish.  As Flash failed to deliver I’m only giving myself 1/2 a point on this one.

Prediction: Full-Web browsers will become the norm for feature phones. Feature phones have traditionally used WAP2 browsers that can only handle made for mobile pages less than about 20KB in size, Full-Web browsers can handle at least 500KB pages and can load desktop sites as long as they don’t require Flash or advanced JavaScript support.  Opera Mini, Bolt and UC will push the boundaries of proxy based browsing to add desktop/smartphone  features like tabbed browsing, copy/paste,  bookmarklets and streaming video to many feature phones.  Javascript performance of proxy based browsers will improve but will continue to be a weak point.  Manufacturers and operators will increasingly specify proxy based full-web browsers or the embedded full-web direct browsers from Opera, Nokia (S40 Webkit), Netfront and Teleca on mid-range phones. The ancient Openwave and Nokia WAP browsers will be relegated to only the most basic phones.

Reality:  Correct, it’s almost impossible  to find a touch screen feature phone that doesn’t claim to have  a “full web” browser. Opera Mini or Nokia’s S40 Webkit browser can be found on many quite low end phones. 1 point.

Reality: Correct, although the “Middle-Web” moniker didn’t catch on.  But “iPhone”, “Touch Web” or “Rich Mobile” sites are the norm for new mobile web development. Sadly too many of these sites are iPhone or iPhone/Android only. 1 point.

Prediction: Traditional mobile web sites will start to disappear – prematurely. With interest and development effort centered around the middle-web, publishers and developers will tend to neglect their legacy mobile sites. This will be a mistake. Even though the handset replacement cycle averages 18 moths in the US and Europe, old phones live on for five years or more in the developing world. Case in point, according to AdMob (PDF), the most popular handsets in Indonesia are the  Nokia N70 and 6600  which are  five and seven years old. Developing markets are also where mobile traffic is growing the fastest; according to Opera betwen Nov 2008 and Nov 2009 Opera Mini page views  increased by  604.5% in Indonesia, 445.3% in South Africa and 1091.1% in Vietnam.  Those increases are on top very significant traffic volume as the three countries are in the top ten in the world in overall Opera Mini traffic.

Reality:  Correct, unfortunately the latest versions of many  web services to not work well or at all with the browsers on older and low end phones. Even Yahoo has started displaying “We’re sorry! Yahoo! Mobile, the starting point to the mobile Internet, does not support your device...” messages on many devices. Proxy browsers that make the web accessible on low end phones do help to fill the gap and their adoption is going through the roof.  Opera Mini users nearly doubled to 80 million in 2010 and the UC Browser claims 100 million users. 1 point.

Prediction: Mobile data plans will change and not always for the better. The iPhone made browsing and connected apps on phones fashionable, especially in North America.  The usage of and the demand for mobile data has risen dramatically among both smartphone and feature phone users.  Users are clamoring for more and cheaper data, However, many mobile operators somehow failed to anticipate that demand and build out their networks to meet it.  Users on AT&T, the exclusive iPhone operator in the US, are increasingly plagued with dropped data and voice connections. The operators most impacted by their own lack of foresight will cap, cut back and increase the prices of their data offerings.

Reality: Correct, data caps and limited data bundles are here.  In the US, AT&T has capped new subscriber’s data plans at 2 GB/month,  T-Mobile USA has a 5 GB soft cap with speeds reduced t0 2.5G (Edge) levels on anything over the cap.  Verizon has capped 4G LTE data at 5 GB/month.  The UK’s O2, Orange and Vodafone have instituted caps of 1 GB/month or less for new subscribers. 1 point.

Prediction: Less impacted networks will see the rising demand for data an opportunity for growth. Expect to see some innovative low cost and data offerings from operators who still have surplus data capacity.  These will tend to be through MVNO’s so that they don’t cannibalize revenue from current customers locked into higher cost plans by contracts.  A couple of examples have already appeared;  MVNO StraightTalk‘s $45/month unlimited voice, messaging and data plan on the Verizon 3G network  and a $40/month unlimited data-only offering  from DataJack, a MVNO using T-Mobile USA”s 3G network. There is some doubt about DataJack’s legitimacy, but StraightTalk is real,  owned by América Móvil, the 4th largest mobile operator in the world, and sold by WalMart, the nation’s largest retailer.

Reality: Correct, in the US in 2010 Sprint began offering unlimited EVDO data for $0.35/day under the Boost Mobile prepaid brand. Another Sprint data bargain is unlimited data and text plus 300 voice minutes for $25/month through their Virgin Mobile subsidiary. Both offerings are limited to a few devices, mostly feature phones but Virgin does have the Samsung Intercept Android phone and many Boost users have reported that they have been able to swap legacy Palm OS and Windows mobile devices onto their Boost Mobile unlimited data plans. T-Mobile recently launched  a $1.50/day “unlimited” data package for prepaid  customers which can be used with any compatible GSM or HSDPA phone. There is a soft cap on the T-Mobile plan, however. After 30 MB are used only Edge speeds are  available for the rest of the day. 1 point.

Prediction: Apple’s tablet will revive the MID. Apple’s product will have a wonderfully intuitive user interface and gorgeous industrial design. It may even include some “killer” new feature like “insanely great” voice recognition software. But it will be expensive, locked down and likely limited to a single operator if it has mobile data support at all. But it will be fashionable, popular and will spur  a rash of clones.  Many of which will be keyboard-less netbooks running Windows 7, but some will use the Android or Chrome OSs.

Reality: Half right.  The iPad is a huge success, selling 10 million units in 8 months. It’s gorgeous, expensive and restricted to running Apple approved software.  But it’s not SIM locked and works on any GSM network.

But other than the Samsung Galaxy Tab which sold 1.5 million units in 2 1/2 months, the flood of iPad clones I predicted is more like  trickle.  The Windows 7 tablets were a bad idea and didn’t happen, the Android tablets are only just now starting to reach the market and we are still waiting for the first Chrome OS tablet. Half a point.

Prediction: Mobile web services will start to replace mobile apps, but just barely. Supporting dozens of mobile platforms with a native app is expensive and nearly impossible.  The Web is seen as a universal platform and will dominate in a few years, but not in 2010. Mobile browsers are getting better. But on most platforms browsers will still lack the sort of fast, stable and comprehensive  JavaScript support  needed for Ajax Web Apps that are anywhere near as fast and powerful as a good native app on the same platform.  News and information services including Email and RSS readers will increasingly favor the web over apps. But messaging, mapping, and navigation will continue to be the domain of native apps for another year or two.

Reality: Correct, there has been a lot of talk about rich web apps, and some do exist, but native apps still have all the buzz. Mobile web apps will go mainstream, but to do so they need to have access to hardware features like local storage, the camera and notification systems which  is consistent across platforms as well as better and more consistent  video, JavaScript and  SVG support. 1 point.

Prediction: More Android, Symbian and Maemo, less iPhone.  Apple has the potential to revolutionize the mobile scene again in 2010 but  the competition is catching up. It will be harder for Cupertino to grow or even retain its market share this year.

Android in particular is reaching critical mass. Its been adopted by every major manufacturer that doesn’t have its own smartphone OSs. The latest Android devices like the Droid and Nexus One meet or exceed the iPhone in speed, screen size, resolution and just about every other capability except Apple’s unmatchable ease of use.

Reality: Half right. It’s more like more Android, less of everything else.  Android was amazing in 2010 growing from a global market share of 3.5%  to 25.3% according to Gartner.  Android took market share from everyone else. Symbian‘s unit sales rose from 18.3 million to  29.5 million but its market  share still fell from 44.6% to 36.6%.  The N900’s UI, browser and openness excited a lot of people but then Maemo became MeeGo and Meego phones have yet to ship.  Half a point.