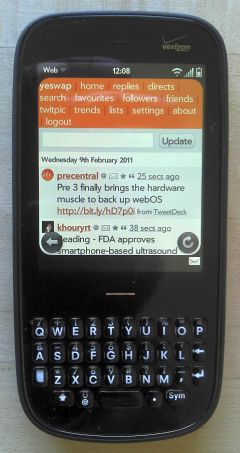 I picked up my first WebOS device last week. It’s a Palm Pixi Plus for Verizon which is being closed out for around $69 on Amazon and elsewhere. I got the Pixi mainly for testing web sites in the WebOS browser using WiFi. I activated it on PagePlus Cellular, a Verizon prepaid MVNO which only requires a $10 refill every 120 days to keep your account active. The per minute and per text rates are pretty low too although data is an outrageous $1.20/MB, but as I’ll be using WiFi most of the time that should be OK.

I really like the Pixi, it’s probably the tiniest, cutest smartphone ever made, even smaller by volume and lighter then the Veer that HP announced today. WebOS is pretty slick too, the UI is very clever and easy to use. I like the understated interface design elements too, which I find more attractive than any of the Android variants I’ve seen.  Interface responsiveness is surprisingly good, much snappier than the N8 or a low end Android phone.

However I found the font size in the browser to be on the small side for my 67 year old eyes.  There’s pinch zooming, but text doesn’t reflow after zooming. When I zoomed in enough to get a readable font size, horizontal scrolling was needed to read each line, which I hate.

It turns out that there’s  a (somewhat geeky) way to increase the font size in WebOS. @Nickersont on Twitter pointed me to a couple of community developed tools; WebOS Quick Install and Preware that let let you install “Homebrew” apps that aren’t in the  WebOS App Catalog as well as Patches.

WebOS Patches  are *nix patch files that tweak configuration settings. You can install patches with either WebOS Quick Install, which is PC (Windows, Mac or Linux) based or PreWare, which runs on the phone.  On the PreCentral forums, “veerar” posted patches to increase and decrease the default font size.  I tried his browserAppConf16.patch which increases the default font size from 14 to 16.  That helped but wasn’t quite enough to make dabr.co.uk, my favorite web based Twitter client, easily readable in portrait mode.  So I modified the patch to bump the font up to 20 as well as to increase the minimum font size from 8 to 10. 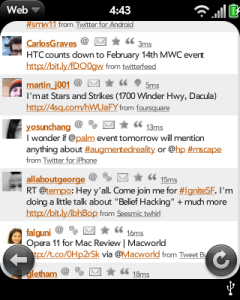 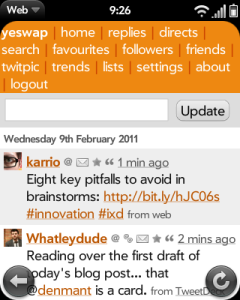 I’m quite pleased with the results, Dabr is perfect. The screenshots above show the site before (left) and after (right) applying the patch. The patch works on a lot of other sites including FaceBook’s leagcy mobile site, Engadget Mobile and Quora. But it doesn’t do anything for others including TechCrunch Mobile, Google Reader, Google Docs or the FaceBook Touch Web site, possibly because they specify an explicit font size in px.

If you want to try it, the patch is here: browserAppConf20.patch It’s for WebOS 1.4.5 only. I don’t recommend using it on other OS versions. If you’ve never installed homebrew apps or patches there’s a good, if slightly dated, overview here to help you understand the process. Then read the release thread for the latest (4.03) version of  WebOS Quick Install. Patching is pretty fool proof and patches can be removed with WebOS or PreWare.  But please, make a backup before you start just in case something goes wrong and you have to reinstall the OS.