I’m still trying to digest today’s announcement that Nokia will adopt “Windows Phone as its primary smartphone strategy”. Symbian will become a “franchise platform”, which based on the slide below (from one of Nokia’s announcement  press PDFs) means will it will be gradually phased out. 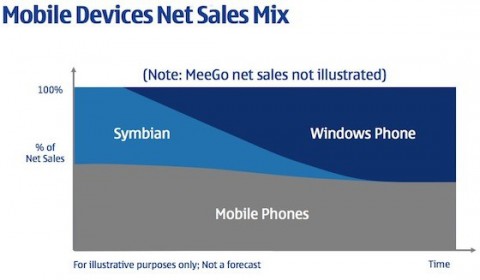 Meego will become a research project for exploration of future products. As the side below shows R&D investment in MeeGo will drop by about two thirds.  That slide also suggests that  massive layoffs in Nokia R&D lie ahead. 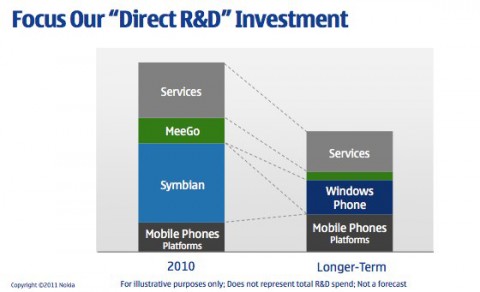 I’ve had about 30 minutes of hands on with Windows Phone. My first impressions as a user are generally good. WP has a fresh new UI that seems responsive and intuitive. It’s a young platform and a bit unfinished in some areas. For the sake of the company’s employees, investors and partners I hope that Microsoft and Windows Phone prove to be a good fit for Nokia and help to reverse its slow decline.

But I’m also sad for all the dedicated Symbian and MeeGo developers, designers and QA folks inside and outside of Nokia who will have their lives and livelihoods disrupted.  I’ve been through a couple of these sorts of transitions myself and it’s hard, very hard both for those let go and those who remain.

As a proponent of open source and open systems in mobile the news is disheartening. Symbian and MeeGo are open source. Windows Phone is closed. The geek dream of a truly open mobile platform is dashed yet again.

I feel that Symbian could have been saved.  It’s a great multi-tasking OS with excellent imaging and video support that is also very power-efficient and runs well on low cost hardware.  The knock on Symbian has been that its user interface is dated and user experience clumsy and unintuitive. I feel that with Symbian^3 Nokia made a great first step in modernizing and simplifying the Symbian user experience.  I still think that with a bit of performance optimization and a committed effort to quash some annoying bugs, Symbian would make a great OS to compete with Android in the low-end smartphone market.

I’m even more disheartened with Meego’s demotion to a lightly funded lab project.  Over a year ago I had a Nokia N900 running Maemo, MeeGo’s predecessor. The hardware was clunky but the OS was very good. It was fast, stable and had a gorgeous, intuitive and powerful user interface. In 2009 Maemo was more finished than Windows Phone today. It had multitasking, desktop Flash, copy/paste and the best browser I’ve ever used on a mobile phone – all things that Windows Phone currently lacks.  Best of all Maemo ran the full desktop Linux plus X11 stack and could install apps from any source including many desktop Linux apps. There’s something very exciting about a handheld device ably running a full open source desktop coupled with a touch friendly UI.

I had high hopes for Maemo and expected Nokia to quicky tie up a few loose ends like the lack of portrait mode support in most apps and begin releasing a long line of polished, consumer oriented Maemo smartphones.

Instead Nokia entered into an alliance to combine Maemo with Intel’s Moblin netbook OS to produce MeeGo.  Unfortunately the alliance seems to have resulted in nothing but delays and setbacks.  Rumors suggest that the N900’s successor has been cancelled and that Nokia is switching to using the not yet commercially available Intel Medfield CPU instead of the ubiquitous ARM processor for its first MeeGo phone.

At least Intel seems committed to MeeGo and  Nokia is still saying they will ship a MeeGo phone this year. I hope they do and I hope they sell millions of them. If the OS is as powerful and open as Maemo I’ll certainly buy one.

Hindsight is easy but I bet if Nokia had stuck with Maemo they would not wound up in the humbling position of having to downsize and rely on using someone else’s OS for their flagship phones.

9 thoughts on “My Thoughts On NokiaSoft”