I attended an Intel AppUp Application Lab at APPNATION in San Francisco today.  The two hour event was targeted at current and potential MeeGo app developers. At the end of the presentation Intel gave every attendee with an Intel Atom powered ExoPC Slate tablet capable of running MeeGo or Windows.

Scott Crabtree from Intel developer relations introduced AppUp which is Intel’s app store. Scott pitched  AppUp as a ground floor opportunity for developers who missed getting in on the iPhone and Android  app booms at the start.

With MeeGo about to hit its stride and only about 3000 apps in AppUp vs. 300,000 in the iTunes Apple store it’s a lot easier for your app to be discovered in AppUp. AppUp is not just about MeeGo either, it’s  an app store that encompasses the entire family of Intel powered devices including those running Windows as well as MeeGo. This presentation however emphasized the MeeGo side.

MeeGo started out as a handset and netbook OS but has expanded to include support for three additional platforms; connected TVs, automotive entertainment system and tablets.

Scott noted that there’s already a potential market of 70 million Intel powered netbooks and entry level PCs that could be running MeeGo.  In the wings are untold millions of future connected TVs, smartphones, automotive entertainment system and tablets. Intel also has commitments from major retailers including Walmart, BestBuy, Dixons, Chroma, Tiger Direct to either bundle AppUp on devices or build their own app stores on top of AppUp further increasing its reach.

Intel provides an array of tools free of charge to MeeGo developers. Qt and Web Run Time (WRT) are the preferred MeeGo development platforms.  The MeeGo APIs are themselves written in Qt. WRT Apps are built with JavaScript and HTML using the Meego Web App Generator. But Meego development is also possible with a wide array of development languages including C, C++, Java, Python or Perl.

Intel calls MeeGo the most truly open mobile OS. The entire code base is open source and project is hosted by the vendor neutral Linux Foundation.

To get started with MeeGo development for AppUp visit appdeveloper.intel.com/en-us/meego. If you act fast you can enter the Intel AppUp developer challenge which is offer some rather exotic prizes. The top prizes are an all-expenses-paid trip to Antarctica and a trip to Russia to fly former military jets at supersonic speeds. Details at appdeveloper.intel.com/en-us/contest/contest-details.

I’m pretty excited about playing with the ExoPC. It boots into MeeGo by default and can also run Windows 7. Intel’s Amarnath Kona emphasised that the tablet software and hardware are somewhere between Alpha and Beta in quality and the tablet is intended for development use and was no way a retail device. I turned my on and it quickly booted up. I had no trouble configuring the WiFi  and launching the browser. I’ll post more about the device and the MeeGo experience once I get up to speed with it. 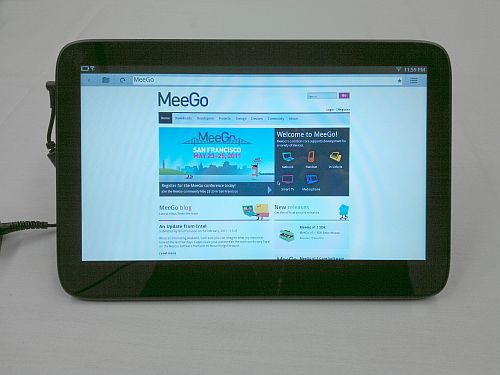