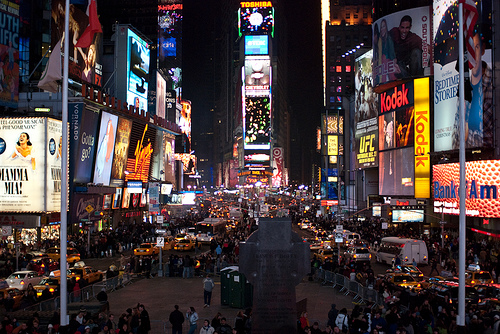 In the great photo above of  New York City’s Times Square by 24gotham,  the fenced off area in the foreground is where workers are preparing the stage for CNN’s coverage of  the New Year’s Eve countdown.   It’s time to look at the 2008 predictions I made last New Years day.  How did I do?

1. Apple will meet their goal of selling 10 million units in the first year. A 3G model will be announced at MacWorld later this month and availability will likely be extended to Japan, China, India, Israel and most of Europe by year end.

I got that mostly right with over 13 million iPhones sold by year end. The iPhone is not officially on sale in China or Israel yet but it is in 79 countries including Japan, India, just about every European country and many African, Asian and South and Central American nations as well. I’ll count this as close enough.

2. Linux handsets will make big market share gains in 2008 but won’t become mainstream – yet. Access and Google will launch devices with their respective Linux platforms and Motorola will continue to push Linux down to middle tier smartphones. Palm’s new Linux OS should finally ship in 2008 too. Google’s Android will generate the most buzz and be the best seller among Linux platforms but it’s appeal will be limited to geeky early adopters and it won’t achieve the cachet and marketshare of the iPhone, at least not initially.

I’m only giving myself half a point on this one. Canalys did report that Linux smartphone sales grew 49% in 2008 and my description of Android’s position was spot on.  However, smartphone sales as a whole grew in 2008 and Linux only increased its market share by 16% to 5.1%. Furthermore no Palm or Access Linux devices were shipped in 2008.

3. Full web browsers will become a standard feature on most mid range feature phones. These browsers will come from Opera and Access. Nokia, which doesn’t have it’s own full-web browser for S40, needs to license one quickly or risk falling behind the competition in this feature area.

Most of the high end feature phones  launched in 2008 did get full web browsers including LG’s Voyager, Vu and Dare (which all use Teleca), Samsung’s Instinct (Teleca),  Behold, Glyde and Eternity (Netfront).  But these are all pricey touch screen models and I did say mid-range. There are quite a few new mid-tier feature phones with full-web browsers including AT&T’s Quickfire (Polaris), most Sony Ericssons (NetFront),  Motorola’s K3, E2, VE20, V8 and V9 (Opera Mobile) and  Opera Mini is bundled with over 30 different phones on 15 carriers. Nokia ported the WebKit browser to S40.  WebKit will be included in all S40 6th edition devices or which two have been announced, the 6260 Slide and 7510 SuperNova, both of which are supposed to ship early next year.  It’s taking a little longer than I predicted for advanced browsers to trickle down to the mainstream phones but its happening.  I think I deserve a point for this one.

4. Mobile browsers will generate 100% more web traffic in 2008 as mobile browsing goes mainstream. The iPhone has made the mobile Internet respectable and other vendors will further drive traffic by touting the features of their full-web browsers.

Mobile traffic statistics are notoriously hard to come by but I’m pretty sure I got this one. I think I may actually have underestimated mobile web growth.  AdMob’s traffic more than trippled (PDF) and  Opera reported a 463% growth in Opera Mini data volume this year.

5. A new genre of mobile oriented website will emerge. Targeted at full-web browsers rather than traditional xhtml-mp wap browsers, these new sites will carry the full content of PC sites including all images but with layout and navigation optimized for mobile use.

Not exactly, more and more sites are putting the majority of their content in mobile format but they are doing this on sites intended to work on all mobile browsers. There are tens of thousands of  iPhone sites but these are a single platform solution, not exactly what I had in mind.  What seems to be happening instead is increasing awareness of full-web mobile browsing by mainstream web developers.  There was a howl of protest from users when Yahoo, Facebook, Orkut and Friendster made changes to their sites recently  that caused them to become inaccessible or broken in Opera Mini.  These problems were for the most part fixed by the publishers working with Opera to fine tune the sites to work on all browsers.  It’s becoming a requirement that all websites work on full-web mobile browsers. I’m giving myself half a point.

6. Carriers will give lip service to openness but little will actually change in 2008. Change is coming but it will take several years before mobile networks and devices are anywhere near as open and interoperable as they are on the web.

Unfortunately true.  Other than the T-Mobile adopting Android, the carriers did nothing to open up their platforms to permit any device on their networks and any application on their phones, which is how I define openness.   The new “open” Verizon is still crippling Bluetooth to keep users from transferring camera phone pictures to their PCs and still doesn’t allow compatible Sprint or Bell Mobility CDMA  phones on their network.  T-Mobile USA  still blocks 3rd party apps from accessing the Internet.  AT&T killed unlimited data plans on prepaid because too many people where using them with data cards and iPhones.

7. Handset hacking and modification will become a major geek pastime as sophisticated users increasingly recognize the computing power in modern phones and become frustrated with the arbitrary restrictions carriers and vendors place on phones. Users will find ways to defeat the requirement that Java ME applications be signed in order to access the more interesting APIs on many handsets. An explosion in the number and power of free Java applications will give feature phones much of the power of smartphones.

I don’t know if it qualifies as “a major geek pastime” but there does seem to be an increase in interest in handset hacking. Every techie with an iPhone seems to have jailbroken it and there are dedicated hacking sites for most popular phone models.  Most Motorola phones and some CDMA handsets can have the Java signing requirements removed to allow unsigned applications to access the file system and GPS. Most Sony Ericssons and recent Nokias can be “debranded” to remove carrier crippling.  S60 platform security has been broken to allow unsigned native apps to be installed and granted access to any resource the user desires.  A feature phone, especially one with a multitasking JVM like recent Sony Ericssons, with Opera Mini, gMail, location aware Google Maps, a Java file manager and a SSH client installed does have the power of a smartphone as far as I’m concerned.  Half a point

8. Non technical users will start to lose their fear of downloading and installing applications from off portal sources, especially outside the US. The US will lag behind Europe and Asia in the adoption of data aware mobile apps because the major carriers, except Sprint, have crippled the Java implementations on their branded phones to the point where they are all but useless.

9. Sprint-Nextel will make a financial turnaround. The number 3 US carrier is losing customers and it’s stock price has dropped 50% in 6 months. It might be acquired if the price keeps dropping but I think it’s more likely that new CEO Daniel Hesse will actually engineer a comeback. Sprint’s 1-RTT/EVDO network is good, the carrier’s biggest problem is lousy customer service – something that can be fixed. Hesse has a reputation for innovation and seems to be willing to expand on the WiMax rollout, mobile wallet and free GPS experiments started by his predecessors.

10. Google will be all over the mobile space in 2008 with new products and services. Either GOOG or another new player will obtain nationwide licenses in the 700 mHz auction and launch a mobile network. If Google isn’t the winner it will partner with either the winner or another carrier to launch a Google MVNO.

Half right, Google did launch a lot of mobile products, Android, major upgrades to  its mobile applications including transit directions and street view for maps, voice search on the iPhone, BlackBerry calendar and contact sync, Gears for mobile, a couple of redesigns of mobile web search.  But we are still waiting for that Google MVNO.  The 700 mHz auction went to Verizon which plans to use it for an LTE 4G network which will start to go live in 2010.  Google did force open access “any device, any app” requirements on the spectrum block. However Verizon seems to be trying to redefine open access as “any application, except on Verizon devices“.

Overall I got seven out of 10, a 70% or a barely passing “C-” grade.   This prediction thing is harder than I thought, but as the football coaches say, there’s always next year.

A lot happened in 2008 that I didn’t predict.  The one thing that surprised me the most was the huge gains in mobile web use in the developing world particularly in Africa, but also in Southeast Asia and Latin America.  Increasingly the heaviest and most sophisticated use of the Internet on mobiles is coming from users whose only web access is from their phones.  This will pose new challenges and offer new opportunities to mobile publishers and advertising networks.