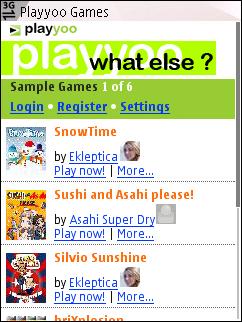 Flash Lite is Adobe’s version of Flash for mobile phones. It’s been around since 2005 but never really caught on except in Japan. It’s pretty much a commercial failure in the rest of the world and I blame that on Adobe’s greed. On the PC the Flash player is free and Adobe makes its money on development tools. With Flash Lite, the player has to be purchased, either by end users or device manufacturers. Charging for the player doomed Flash Lite. If the mobile player had been available to OEMs and users at no cost, Flash Lite would be as ubiquitous on mobiles as it is on PCs.

There are some Flash Lite enabled phones, mostly mid-range or better Nokia and Sony Ericsson handsets.

The relatively small installed base means that there isn’t a lot of Flash Lite content either. But there is some. Playyoo (m.playyoo.com) is the first mobile web site I’ve found that offers free Flash Lite games. Anyone with a compatible phone can download and play these games. But Playyoo is more than just a game download site. It’s also a community for gamers with high score contests, user driven game ratings, forums and a web based game creator. Anyone can create a Playyoo game using a template based online tool on the full playyoo.com website. There are over 500 user created games on Playyoo. The  templates pretty much limit you to creating simple “casual” style games. 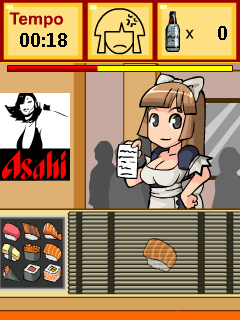 I tried a couple of Playyoo’s games and they were highly playable and a lot of fun. The games are around 100 KB and download quickly. My Nokia N95 even gave me the option of saving downloaded games locally so that they could be played anytime directly from the phone’s Flash player application without the need to re-launch the browser.

My favorite Playyoo game was “Sushi and Asahi Please?”,  a matching game where you have have to quickly match pictures of sushi items to win bottles of Asahi beer. The instructions and prompts in that game are in Italian, but the game is simple enough that I had no trouble figuring it out. Playyoo has other games that are in English. Playyoo is ad-supported, but I found the advertising infrequent and unobtrusive.

If you have a Flash Lite equipped phone, (see Adobe’s site for a list) give Playyoo a try. I noticed that the list includes a number of Verizon feature phones. Verizon normally blocks off-portal downloads of games or applications so I suspect Verizon users will not be able to use Playyoo. If any Verizon subscribers try Playyoo let us know if it works or not. Source: Oh Mobile Directory