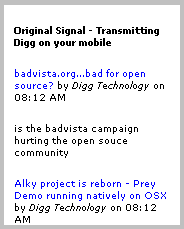 Seems like everyone wants to mobilize Digg.com. I think Eugenia at mobits.com was the first with her Digg Mobile (review) which launched in August. A month later there were three more, review here. But it didn’t stop there, SociallyGiven.com has posted a piece titled 7 Versions of ‘Digg Mobile’ Compared which is a nice wrap up with screenshots of some of the current mobile Diggs – including five I hadn’t seen before.  The nicest of the new crop is Original Signal, Transmitting Digg, digg.originalsignal.com/mobile which shows a reasonable 10 headlines per screen with the links to the Diggs going through Google’s transcoding proxy. Unlike the most of other new Mobile Diggs, this one has small enough page sizes to will work well on any mobile. I’ve added it to the Technology/Tech News/Digg page on yeswap.com where I also have links to the best of the mobile Diggs from the last round of reviews.

SociallyGiven actually missed at least two mobile Diggs including my favorites from the last round,  DiggPad and HTCFans.com’s version. That makes at least nine mobile versions of Digg. Why so many mobile Diggs? Digg is a hugely popular site and it’s also  relatively easy to put a mobile front end on Digg’s RSS feed. It’s easy and every Digg user with a web capable phone is a potential user – that’s a lot of potential traffic to give people an incentive to build a better mobile Digg. Unfortunately, the total Digg experience doesn’t translate very well to mobile. I mean Digg is all about collectively finding compelling stuff on the web – the full PC Web. So while it’s easy put up a page with the the blurbs and links from Digg’s front page most of the sites that are Dugg don’t work very well in a mobile browser – even through a transcoder. Perhaps even more significantly, you can’t Digg, Bury or post a comment with any of these mobile Diggs using a mainstream phone.

I think what we really need is a Digg-like mobile site dedicated to users sharing what they think are the best mobile sites. I’m not sure exactlly how this would work but I’m thiinking of a new type of mobile proxy that doesn’t transcode – all it does is add a “Digg This” button to the bottom of each page in any mobile browser. A mobile Digg needs something like this because mobile browsers don’t support bookmarklets – relatively few even offer cut and paste. Digg would never have gotten big without Javascript driven Digg This buttons. A mobile Digg needs a similar seamless way for users to Digg the current site in their mobile browser.

One thought on “Nine Mobile Versions of Digg!”