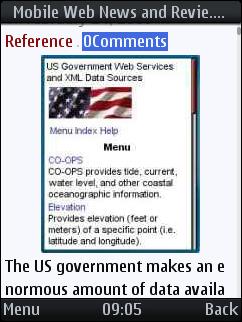 Thanks to tips from a couple of readers, I can report that the official English version of UCWEB 6.3 for Java ME phones is now available. You can read the release announcement on the UCWEB forum here. Download the new release from http://www.uc.cn/English/download.shtml (PC) or  http://wap.ucweb.com (mobile).

New features in this release are listed as:

This release seems almost identical to the un-official English translation of UCWEB 6.3 that has been available since late last year.  There is one key difference though.  This one is signed with both VeriSign and Thawte certificates.  That means that, on most phones, you can disable the security warnings that pop up with the unsigned unofficial  version when you access the web or upload and download files.

It’s not all rosy with this release, however.  Several features that are available in the Chinese version and the unofficial English one are missing.  Most notably the popup blocker is gone as is the ability to specify a proxy server.

UCWEB is a one of my favorite browsers. I’d rate it equal overall to Opera Mini.  Each has it’s strengths and weaknesses.  UCWEB’s strong points are its superior feature set which includes tabbed browsing and the ability to copy text from a web page, neither which of which Opera mini has. UCWEB seems to have a more robust server backend.  Opera Mini servers currently seem to be suffering from overload with increasingly frequent timeout errors and issues with links and web forms not working and file downloads failing.  UCWEB seems more reliable. I had no problems with opening Ebay listing pages and downloading .jar files, neither of which currently work with Opera.   UCWEB also does a better job of displaying all the images on large pages.  For example, on my N95.3, UCWEB can display all 83 images on the  1.5 MB Wikipedia “United States” page while Opera only shows gray box placeholders for half the images.

In spite of these advantages I still prefer Opera Mini for general browsing for one reason.  UCWEB’s text rendering is ugly to the point of making reading difficult. The Java version is a little better than the native Symbian one in that it uses the phone’s built in fonts rather than the thin and pixelated ones used in the UCWEB native Symbian executable.  But it has a show stopping rendering problem of its own.  There is no word wrap! Lines wrap in the middle of words which absolutely drives me crazy.  Opera Mini also supports more handsets than UCWEB. Mini runs on virtually any phone with Java support while UCWEB doesn’t work on BlackBerries and many Motorola phones.

Of course you don’t have to choose between browsers. Opera Mini and UCWEB can happily coexist on your phone and you can use which ever one works best on a particular site.

2 thoughts on “Official Release of UCWEB 6.3 For Java ME”