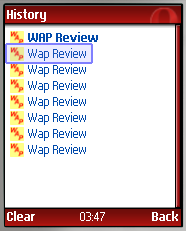 Opera Mini is the best mobile browser – period. I’ve been using it daily for a year and a half. Even comparing Mini with smartphone browsers like Netfront, Webkit or Opera Mobile, I prefer Mini. It loads pages faster on a slow connection, renders images quickly and beautifully and has an extremely well thought out user interface,

Opera released a second beta of the next generation of Opera Mini last week. It launched two new features; custom search and landscape mode and also contains many bugs fixes. See my review for more details.

However, I’ve come to the conclusion that I can’t use the new beta. The issue is the cache problem that I mentioned in the review. I thought that I’d fixed it by reinstalling but after four reinstalls it’s now obvious that the problem is still there. The cache in the new beta tops out at 60 KB on my phone. That may sound like a lot but it’s nothing compared to the seemingly bottomless cache of all prior versions of Opera Mini. In any other version of Mini it’s normal to have multiple large pages totalling hundreds of KB in the cache.

The screen shots tell the story. They show Opera Mini’s history page in the Sony Ericsson Java SDK’s emulator after running a simple test. The test consisted of starting at the home page of the desktop version of this blog, pc.wapreview.com, and following the previous entries link 11 times . The first image shows Beta Two. The single bold entry is cached, the others aren’t.The second image shows Beta One with all 11 pages cached. Each page is about 50 KB so Beta One cached about 600 KB and Beta Two only 50! 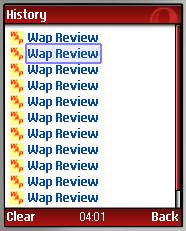 It’s not just an academic issue either. The off-line browsing trick I wrote about doesn’t work without a big cache. My favorite site, Bloglines Mobile, is essentially broken in Beta 2. Suppose you load a Bloglines page with say 30 posts, about 100 KB worth, and after reading a few posts you click on an interesting link in one of the posts. When you hit the back key, the page isn’t in the cache anymore and Opera has to reload the page. On most sites this just means a delay while the page is fetched. But because of the way Bloglines works posts are marked as read when they are first loaded. Bloglines Mobile only displays unread posts. When the page reloads all the posts are gone because they have been marked as read. This was never a problem with any earlier version of Mini because the Bloglines page was still in the cache.

I hope I don’t sound too critical of Opera Mini. I love that program and will continue to use the older versions. I’ve filed a bug report and am I’m hoping the cache problem will be fixed in the next release – I really want to use all the new features, but not if it means giving up off-line browsing and Bloglines.

The cache problem may not occur with all phones, though the fact that it happens with the Sony Ericsson emulator is not a good sign. If you’re trying Beta 2 and running into cache problems, the solution is simple. Go back to version 3.1, it’s doesn’t do landscape or desktop view but it’s fast and stable and you won’t run out of cache. Download it from operamini.com with you phone’s built-in browser.

14 thoughts on “Small Gotcha with the New Mini Beta”