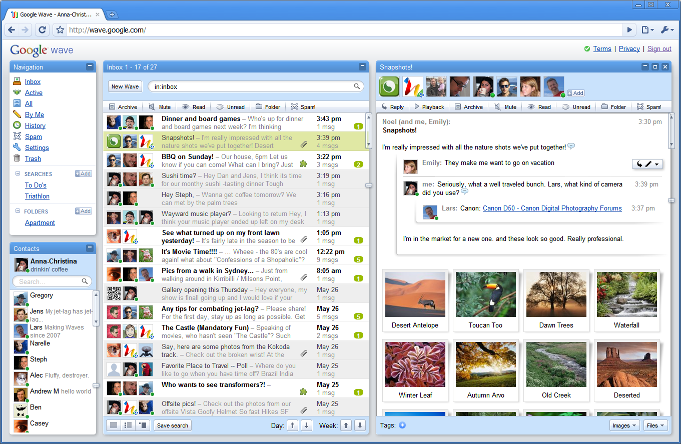 The big announcement at I/O today was Google Wave, a personal communication and collaboration tool. Google obviously has great aspirations for this product. The entire 90 minute keynote was devoted to a demo of Wave by lead developer Lars Rasmussen and product manager Stephanie Hannon. Lars and his brother Jens are the brains behind Google Maps. Wave will be open source and is pure HTML5 and runs in the browser, including the browsers on the iPhone and Android.

Lars described Wave as the re-invention of email, which is still the most popular form of communication of the web even though it’s 40 years old. Wave combines features from email, IM, bulletin boards, wikis, document management and source control systems. The results is a collaborative communication service that supports threaded, messaging, real time updates, multi-user photo albums, collaborative document creation and much, much more.

The demo showed a lot of amazing features including:

At the press conference after the keynote, Lars emphasized that mobile is a very important part of Wave and that the same GWT code is used to generate both mobile and desktop versions.

The Wave closed Beta launches today with invites going out to all I/O attendees. More details can be found on the Google Blog and at wave.google.com, waveprotocol.org and code.google.com/apis/wave.

Update: Watch the Wave presentation from the keynote on YouTube