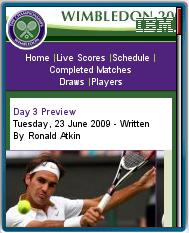 The Championships at Wimbledon, the world’s premiere tennis event started yesterday and will continue through the next two weeks.  This year, the Wimbledon organizers, the All England Lawn Tennis and Croquet Club, have commissioned IBM to create a mobile web site and iPhone and Android apps for the event.

Sadly there’s a bit of fail with both the mobile site and the Android app.  Wimbledon.org claims that you can point your mobile browser at m.wimbledon.org for the mobile site. And an IBM press release states the the Android app, called IBMSeer, will be in the Android Market by 22-June-2009.  Neither of these seem to be true, m.wimbledon.org redirects to the wimbledon.org desktop page in both the Android browser and Opera Mini on my HTC Ion (developer version of the Magic) and the app is nowhere to be found in the Market.  Fortunately the IBM press release says that the app can also be downloaded by sending a text with the keyword “smart” to 600999.  Unfortunately, I get a delivery failure doing that.  I suspect that the short code is a U.K. only one (I’m in the U.S.) but if that’s the case why doesn’t the press release say so?

m.wimbledon.org does work as advertised  on my BlackBerry and N95 so it looks like overly aggressive browser detection is to blame for the failure on the Ion.  This sort of thing is really common and also really dumb.  A given URL, usually a *.mobi or m.* is billed as delivering mobile formatted content, yet for some users it redirects to a desktop version.  I’m sure the designers have the best of intentions but it doesn’t work.  If I wanted the desktop site I wouldn’t have bothered to type M.wimbledon.org now would I?

I did find a workaround to the redirection problem.  m.wimbledon.org/mobile/ (the trailing slash is required) will get you the mobile site in any browser.  The mobile web version is actually quite nice with news, interviews, live scores, results and a complete calendar of matches for the entire tournament.  It works great in Opera mini and the Android browser although I’m concerned that the page sizes of up to 290 KB (thanks mainly to poorly optimized images) are too  large for most feature phone embedded browsers.

I’d really like to try the app too. Although part of it,  a “virtual reality” guide to the Wimbledon grounds, is only useful to  fans attending Wimbledon, it’s also supposed to feature live match videos which clearly have a worldwide audience.  Anyone have a link to the IBMSeer Android .apk?