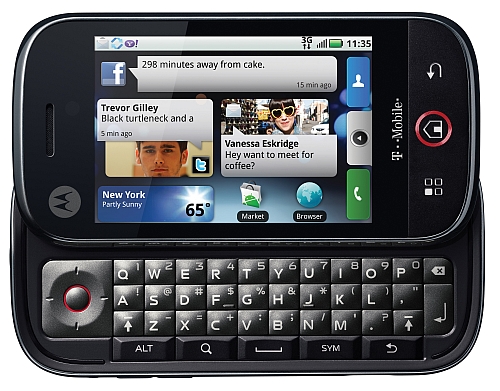 Motorola’s first Android phone was announced today by Motorola CTO Sanjay Jha at GigaOm’s Mobilize conference in San Francisco.  The phone is Motorola Cliq MB200, which looks like the same phone that was widely leaked as the Morrison.  Thankfully the toy-like bright blue trim featured in most of the leaked shots has been replaced by basic black.  Specs include: 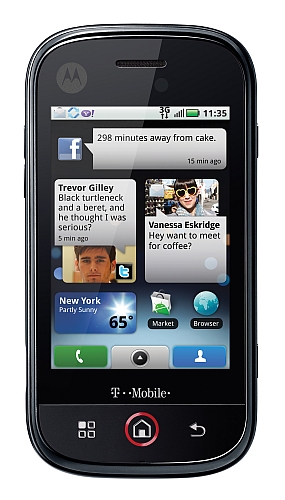 The Cliq will be released on T-Mobile USA in time for the holidays.  It will be marketed worldwide as the DEXT with availability in the 4th quarter of 2009 on Orange in France and the UK, América Móvil in Latin America and Telefónica in Spain.

Jha promised another Motorola Android phone would be announced in two weeks.  I suspect this is the “Sholes” a  CDMA handset for Verizon. Also mentioned was Motorola’s intention to release “many” Android devices in 2010.

The biggest thing about the announcement is probably not the Cliq’s  hardware but MOTOBLUR, a Motorola customization for Android that appears to combine:

The onstage demo of MOTOBLUR left many questions unanswered but Motorola has put a lot of information up on their site already including a press release with high res images and a consumer page with full specs and a MOTOBLUR video and interactive simulator.  There’s also a video hands on posted on GigOM.

4 thoughts on “Motorola’s First Android, the “Cliq” With MOTOBLUR”