Launched today from Google labs, Fast Flip (fastflip.googlelabs.com) is being billed by Google as a faster way to read news. It’s basically a news search engine like Google News.  But instead of text summaries, Fast Flip returns results in the form of high-resolution screen shots of the first page of online news articles matching your query. You can read  at least part of the story using the image and click through to the source site to read it all.

The images in Fast Flip are cached and on a PC with a broadband connection you can quickly “flip” from story to story using on screen buttons. It is supposed to evoke memories of flipping the pages of a print magazine. The images are large enough so that the text was easily readable on my large desktop monitor. Fast Flip only uses content from three major dozen publishers whom Google has partnered with. Google is sharing advertising revenue with the partners.

I’m not sure how well Fast Flip is going to go over with traditional publishers who already tend to blame Google for the demise of print media.  Obviously anything that makes reading the news online faster and more “print-like” is going to cut into sales of traditional newspapers and magazines.  On the other hand if Google can return enough revenue to its publisher partners to cover the costs of creating the content it might actually help them survive. 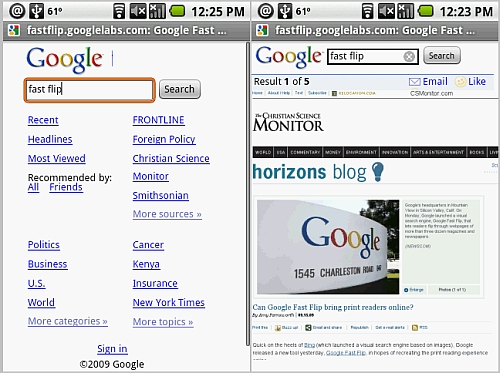 There is a mobile version of Fast Flip as well but only for the iPhone and Android devices. It works pretty well on my Android phone.  Flipping is done by swiping side to side. Google is using the local storage capabilities of Gears on Android and  HTML5 on the iPhone to preload and cache the images so that scrolling between them is smooth and quick. 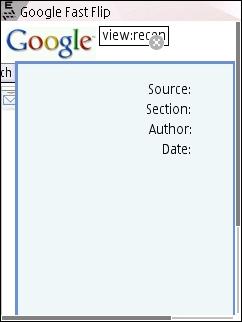 There is definitely a wow factor but I can’t see myself actually using Fast Flip on the Android phone.  The problem is that the text in most of the images is just too small to comfortably read in portrait mode. They are mostly readable in landscape mode but only seem to flipable when the phone is vertical so you have to keep turninng the phone from horizontal to vertical to navigate and back to horizontal again to view.  The dreaded horizontal scrolling is sometimes needed to read as well, even in landscape.  All in all I think I’ll stick to Google Reader on the phone.

The mobile version of Fast Flip is at the same fastflip.googlelabs.com URL as the desktop one and unlike the iPhone/Android versions of Reader and iGoogle I haven’t found a URL to force Fast Flip Mobile to appear on unsupported devices.  It probably wouldn’t work anyway. I tried using the iPhonesque mod User Agent switcher to make my N95’s browser identify itself as an iPhone. With it, the mobile version of Flash Flip loaded but was unusable.  Not only was there no way to flip pages but a large blank JavaScript alert that could not be dismissed obscured the news content.

One thought on “Google Fast Flip Mobile for iPhone and Android”