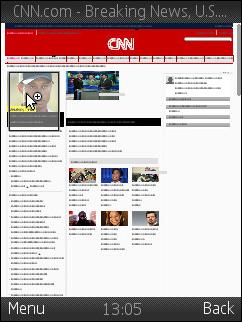 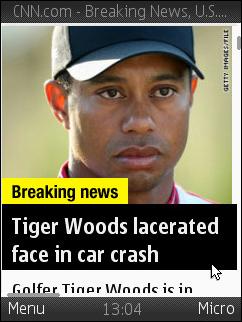 UCWEB guru “Jbpseudo“, sent me a link an English translation of a leaked version (7.02.3) of the upcoming UCWEB 7 browser.  The main change since UCWEB 7 Beta 2, which I covered 2 weeks ago, is that it now offers the equivalent what Opera calls “Desktop View” where pages are formatted more or less as they are in desktop browsers, with horizontal scrolling required to see the full width of the page.  In UCWEB it’s known as “Zoom Mode” and is toggled using a check box under “General Settings” in the “Settings” Menu. Like Opera Mini, UCWEB 7 has only two zoom levels, a fully zoomed out thumbnail view and a  zoomed in one. The “5”  key instantly toggle s between the zoomed in and zoomed out views.

As you can see from the screenshots below UCWEB’s Zoom Mode has some issues with overlapping text and images. The page shown isn’t doing any fancy It uses a simple CSS float rule to position the image to the right of the text.  While I’m disappointed that UCWEB fails to render such a simple and common use case properly, I don’t personally consider it much of a problem as UCWEB’s fit to width regular mode works very well.  On mobile devices, especially those with a screen less than 3 inches diagonally or 320 px wide, I generally prefer a fit to width mode over one that requires horizontal scrolling.  Except for viewing tabular data, I’d be unlikely to use the Zoom Mode even if it worked correctly. 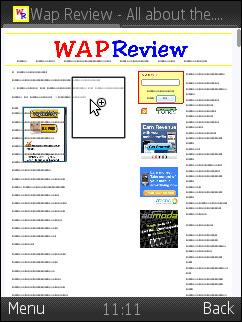 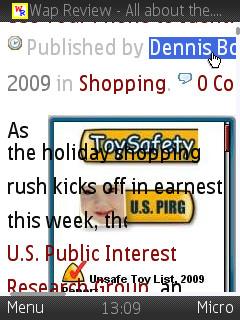 A more serious problem with this version is that it uses a Chinese based proxy server and many popular sites including  Facebook and Twitter are blocked by the “Great Firewall“. Another issue is that because the server’s requests originate in China and do not include an accept-language HTTP header, some sites, including Google and MySpace display their Chinese versions.

Mobile technology blogger Manojr Tiwari, has posted a number of screenshots of the leaked UCWEB, including one showing off the browser’s optional (and rather garish) purple theme.  Manojr also has a post about this version on his blog along with a link to what is apparently a different translation of it.  I couldn’t get Manojr’s download to work on my Nokia N95, but the one Jbpseudo sent seems stable and usable except for the problems related to the Chinese server.  You can download it here: JAR, JAD.