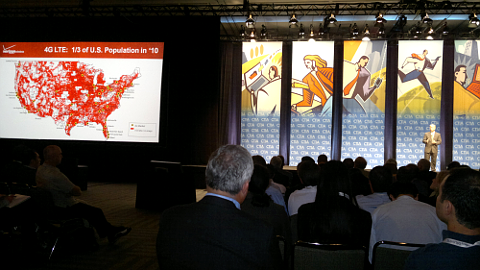 Today was the first full day of CTIA.  I didn’t expect a lot of big announcements but I was wrong, there was actually a lot of news.  First up, Verzion announced its LGE rollout plans which are quite aggressive.  They plan to cover a third of the US population by year end with service lighting up in 38 cities and 60 airports.  PreCentral has the details including a list of the lucky cities and airports.  Verizon president and COO Lowell McAdam said that the first  LTE devices will be USB modems but promises that at CES in January, the carrier will announce at least a half dozen LTE smartphones and tablets.

If other Verizon news, the Wall Street Journal ran a story this morning that according to elusive “people familiar with the matter”,  Verizon would be getting the iPhone early next year. When asked about the WSJ story at CTIA McAdam would only say “At some point our business interests will align”.

Android seems to be the CTIA’s un-official theme this year.  The lobby is dominated by a gigantic Android robot and  at least ten new Android phones were announced today. 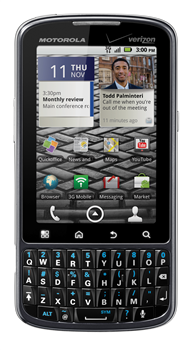 Motorola announced four new Android handsets today. The most interesting of the bunch was the Droid Pro for Verizon, an upscale BlackBerry like device with a 1 GHz CPU, Froyo and a 3.1” 320×480 screen, large for this form factor. A world phone, the Pro sports just about every 2G and 3G radio known to man; CDMA/EVDO Rev A, tri-band (850/1900/2100) HSDPA/HSDPA and quadband GPRS/Edge. Targeted at the enterprise, the Pro ships with QuickOffice Suite for document editing and supports VPN, MS Exchange push email and calendar plus remote wipe. The PRO can also be used as a WiFi hotspot. It is expected to be released in the first week of November at a subsidized price of $200 on a two year contract. I played with a Pro briefly and I like it. About the same overall size and weight as the Nexus One, it trades a smaller screen for a spacious and very usable keyboard.

Sprint announced three low to midrange Android phones.  The trio have similar specs.  All have 320 x480 HVGA displays. The touch-only Sanyo Zio and the QWERTY slider Samsung Transform have 3.5″ screens and run 2.1 with promised upgradeability to 2.2. The LG Optimus S has a smaller 3.2″ screen but ships with 2.2.  MobileCrunch has pictures and specs for the phones. The Zio and Transform will be available next week at $99 and $149 respectively, on contract and after rebate. The Optimus S will arrive on Halloween at $49 after rebate on contract.  The gimmick with all these phones is that users can choose from an assortment of “Sprint ID” packs, bundles of apps games, ringtones, widgets and wallpapers targeting various interests and life styles such as auto buff, music lover or gamer. Intomobile has pictures and videos of some of the ID packs.

Other new Android devices announced at CTIA were T-Mobile’s version of the LG Optimus, Cricket’s Huawei Ascend and US Cellular’s Samsung Galaxy S variant, the Mesmerize.

I actually spent most of the day at Futuretech’s “iPad and Tablets: Publishing and Entertainment” sessions at CTIA where I also moderated a panel. It was an interesting and stimulating experience for me.  I’ve been on the fence about tablets but after hearing some of the ideas that were tossed about at the conference I  now believe that tablets have the potential to revolutionize both mobile and fixed computing.  It’s a big  topic that deserves a post of its own which will have to wait for another day.