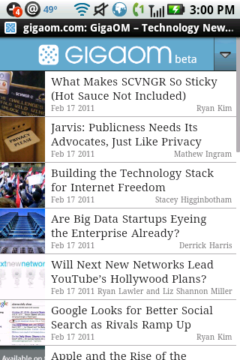 GigaOm is on my short list of must read tech blogs. Founded in 2001 by veteran technology and business journalist Om Malik (Red Herring, Forbes, Business 2.0) it has grown to become one of the most widely read online journals covering the business of the web and technology. Om, who is one of the most knowledgeable analysts in the industry and a great interviewer, has assembled a team of first-rate writers for the site including Kevin C. Tofel, who specializes in mobile.

I recently followed a link to a GigaOm piece in Opera Mini and landed on a new mobile version of the site. I liked the way it looked so I dug a little deeper and I discovered that GigaOm, which is published on WordPress.com, actually has two mobile versions. Basic browsers, a category which apparently includes the Symbian^3 and bada browsers – sorry Nokia and Samsung!) get the same generic Alex King designed mobile template as other WordPress.com hosted sites. But the iPhone, Android, WebOS and Opera Mini are served  a customized version of WPTouch. Whoever designed it did a nice job of adapting GigaOm’s branding and color scheme to mobile media. The addition of a thumbnail image for each post and the elimination of the heavy borders of the default WPTouch layout has made the design a lok more inviting and modern looking to my eye.

Before anyone asks, GigaOm Mobile is served to supported browsers from the usual gigaom.com URL. There doesn’t seem to be a way to force the custom mobile layout in browsers that don’t get it by default.