New features claimed for this release include:

Not all of the enhancements apply to all platforms. The table below shows what’s supported where. 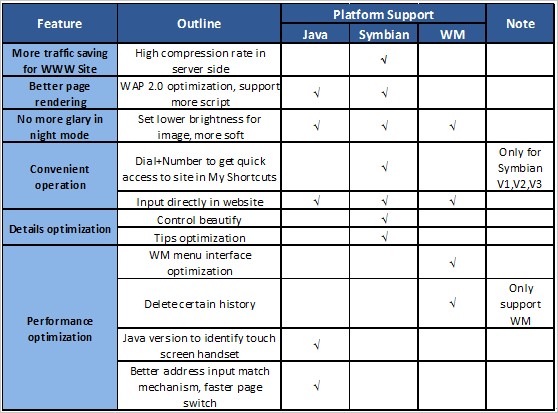 I loaded UC Browser 7.7 on three handsets, a Nokia N8, where I tested both the Symbian^3 and Java versions, a Samsung Wave S5800 bada phone (using the Java version) and a Motorola WX400 “Rambler” basic QWERTY feature phone (Java).

I was generally quite pleased with the new version.  I didn’t run any formal speed tests but page loads seem noticeably quicker than with UC 7.6 and also faster than Opera Mini 6 and Bolt 2.5, especially on the N8 and Wave.

I especially like the finger friendly menus in the Symbian touch version (images above, left and right).  The touch targets ate large and easy to hit and the tabbed layout of the main menu is intuitive and minimizes the number of taps needed to perform a given action.

I was also impressed with the touch screen interface’s responsiveness and precision on both the N8 and Wave. Scrolling is quick and free from lag. I found it easy to scroll precisely to any point on a page without over or under shooting the target.

Unlike most touch screen interfaces, it takes two taps to open a link or press a button. The first tap selects and highlights the element and the second performs the action.  This sounds cumbersome but it does seem to improve accuracy. If the first tap selects the wrong element you can tap again to select the correct one. Selecting tiny links and buttons on the touch only N8 seems to be easier and more accurate with UC than with Opera Mini, Bolt or the Symbian browser.

Site compatibility, long a UC weak point,  seems to be pretty good too. I had no trouble logging into and using the desktop versions of Twitter, Gmail, Yahoo Mail, Google Reader and the WordPress Dashboard.  The only site I had problems with was Facebook. The desktop version of Facebook kept complaining that I hadn’t entered an ID and password even though I had.  Switching to Facebook’s “Alternate login” worked but took me to the mobile version of Facebook.

The browser’s desktop or “zoom” mode remains a weak point with missing or overlapping page elements on many sites. There’s little reason to bother with it though as the fit to width mode is so good.

I was hoping that “Java version to identify touch screen handset” meant finger friendly menus like those of the Symbian V.5 version on Java touch phones. But the changes are more subtle. The text based menus look the same as before (image above, second from the right).  What’s new is that you can now slide the menu selection up and down with your finger.  When the proper menu pad is highlighted a tap anywhere on the menu executes the selected item’s action. This design works well and makes the relatively small menu pads quite usable with touch.

Another touch enhancement in the both the Java and Symbian versions are “grab handles” that let you resize the selection when copying text from a web page (image above, right).

Inline editing doesn’t seem to be available in  the Java version with either the N8 or Wave which are both touchscreen devices. On the non-touch, full QWERTY Motorola WX400 in-line editing was more trouble than it was worth. There were multiple problems with the key mappings; the Caps key was non-functional, the O and P keys where mapped to menu soft keys rather than the appropriate letters and the number keys were mapped to seemingly random letters. The work around is to click on a field and then use the “*” key shortcut to switch to the full screen editor.

In fairness to UC, the Java ME spec doesn’t define keycodes for QWERTY keys and every JVM and handset vendor seems to do QWERTY key mapping differently.  Opera Mini and Bolt don’t handle the WX400’s keyboard correctly either, but at least they have an option to turn off inline editing. UC doesn’t which means several extra key-presses on each field to get into and out of full screen edit mode.

To sum it up, UC Browser 7.7 is an excellent browser on all supported platforms. The new version is faster than ever and site compatibility seems to be improved as well. Full screen editing was added to the Java version in this release but has key mapping issues with at least some full QWERTY phones.