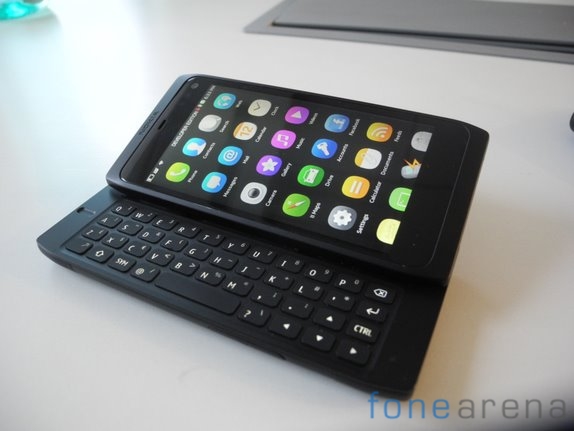 Two week’s after Nokia’s N9 MeeGo phone announcement the platform is still generating considerable buzz.  The N9’s not released yet but its developer only clone, the N950, is starting to show up outside of Nokia – and its getting rave reviews.

Sergejs Cuhrajs at My Nokia Blog attended an Intel Developer event in London yesterday where several of the developer attendees had already received N950’s which they were “effortlessly using as a primary phone”.  Sergejs got to play with one of the N950s and blogged about his experiences. Like Dhruv, he was impressed with the build quality, calling it “consumer ready” and noting that the slider hinge felt very solid.  Which is interesting as a rumor going around at MWC time claimed that the N950 was scraped as a consumer device because mobile operators found the hinge too flimsy. Segejs urges Nokia to “please take my money!” and release another MeeGo phone this year, a consumer version of the N950.

Unfortunately I’m afraid few of us will ever see the N950 or even the N9.  Rumor has it that only some 93,000 N9’s will be produced.  Based on the countries listed in a ‘Check Availabilty” dropdown on Nokia.com, the phone will only be available in a limited number of markets  – which do not include the US, UK, Canada, India, Germany, France, Italy or Spain. While the N9 will probably be available in the gray market in the unsupported countries it will be expensive and without warranty.

Nokia  CEO Steven Elop has been quoted as saying that even if the N9 is a huge success, the company will not create any more MeeGo phones. Which seems like a strange statement coming from the head of a for-profit organization where success is invariably followed by a sequel.

Instead Nokia seems committed to Windows Phone as its sole smartphone platform. Unfortunately for Nokia, Windows Phone, unlike MeeGo, does not seem to be generating much enthusiasm with the tech press and or with the buying public. For the sake of Nokia’s employees and investors,  I sincerely hope Nokia’s Windows devices are a success However, if I were Mr. Elop I’d keep the heroic MeeGo team employed and busy working on a fallback strategy in case the Windows Phone effort falters.