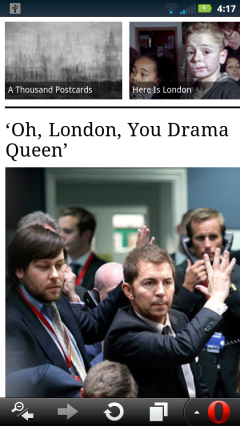 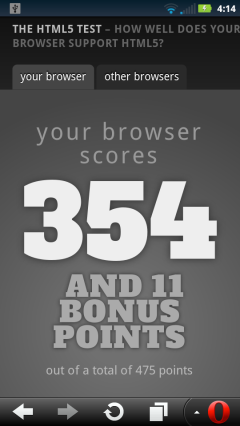 Last week, Opera Software released Opera Mobile 12.0 for Android 1.6 and up and for Symbian 3rd edition FP1 and later. Here’s a rundown of the new features in Opera Mobile 12 as well as my impressions using the new browser on both platforms.

New Features on both Android and Symbian: 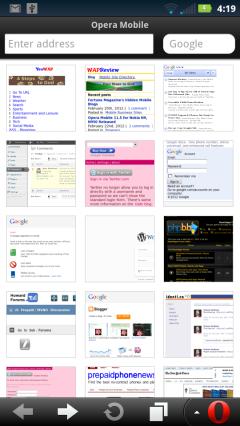 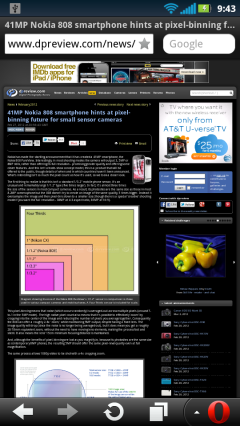 Known issue on both platforms

Known issues in the Symbian version

Hands on with the new releases: I installed Opera Mobile 12 on a Motorola Photon Android 2.3 phone and on a Nokia N8 running Symbian Belle. Opera Mobile 12 installs as an update to Opera Mobile 11.5 and inherits your settings and bookmarks.

The support for more than 9 Speed Dials in Opera Mobile 12 on both platforms is a nice enhancement. I have about 15 commonly used sites and now they are all my Opera home screen for easy one tap accessibility.  I did encounter the known issue where Speed Dials move around at random in the new version. Not only did mine move around but one was duplicated and another of my Speed Dials disappeared. Turning off Opera Link seemed to stabilize the Speed Dials and the new ability to rearrange Speed Dials by dragging made it easy to put them back into the order I’m used to.

Of course, the HTML5 test only measures potential, it’s up to Web developers to exploit the new features and most of them don’t seem to give a damn. Site after site either serves Opera 12 a lowest common denominator site designed for feature phone browsers (Twitter, Facebook and most Google sites) or a modern site with iOS/Android specific dependencies that’s badly broken in Opera Mobile (Linkedin). With Google sites it’s generally possible to force the “touch” version that’s served to Android and iOS  browsers by using a special URL and the touch versions of  Gmail, Reader, Calendar, News, iGoogle and Google Plus all work well in Opera Mobile, as do almost all desktop sites.

Other than the lack of support for Opera Mobile by Web designers I found nothing at all to fault about the browser on the Photon. It’s fast, good looking and I find the Opera user interface easier and faster to use than that of the Android browser. 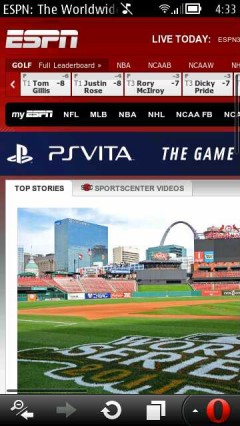 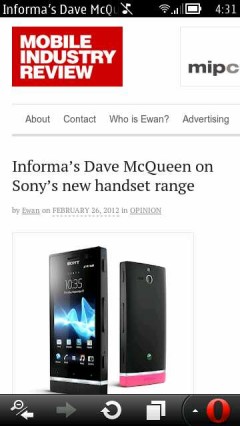 Symbian version: On the N8,  Opera Mobile 12 acquitted itself pretty well. It felt noticeably faster than the Symbian browser and was able to handle pages that the native browser had problems with. It did feel slower and less smooth than the Android version of Opera Mobile. It was rather unresponsive during page loads and on large pages with lots of images scrolling tended to be jerky and a little hard to control. I think the difference is mainly due to hardware. There’s no way that the N8’s 680 Mhz single core processor and 256 MB of RAM can match the performance of the Photon’s dual core 1 Ghz Tegra 2 and gigabyte of RAM.

As noted in the known issues of the changelog, the Symbian version of Opera Mobile 12 doesn’t have the same level of HTML5 support as its Android brother. It scored 278 plus 2 bonus points on HTML5test.com (image below, right). That’s actually lower  than Opera Mobile 11.5 for Symbian which did 286 (image below, left). The score is lower because Opera removed support for the <video> and <audio> elements.  I suspect that’s why the videos on touch.dailymotion.com, which played in 11.5, do not play in 12.0.

The form posting bug, mentioned in the changelog, effects the green check mark key on the Symbian  and Swype keyboards. That key is used to close the keyboard after you have finished entering data in a field. In 12.0 the check mark key not only closes the keyboard but also posts the form. This poses a problem on multi field-forms like log-in dialogs.  When you tap the green key to close the keyboard after entering your user name (so you can tap the password field hidden by the keyboard), the form posts and the site complains about the missing password. 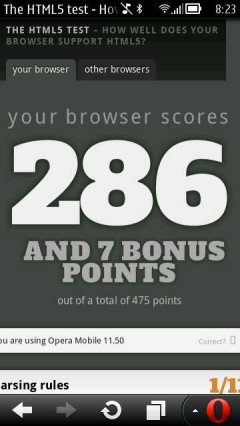 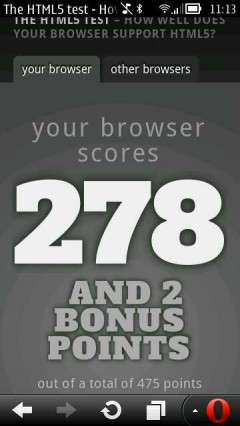 In spite of lack of <video> support and the form posting bug I still prefer Opera Mobile 12.0 over 11.5 on my N8. I really like the UI improvements, particularly being abe to close tabs with a single tap and to have more than 9 Speed Dials. I don’t watch many Dailymotion videos and I use the Beta Swype keyboard so the form bug and lack of HTML5 video support don’t really effect me.  However the loss of <video> support is a big deal and I hope that Opera restores it quickly and also fixes the form bug posting and self rearranging Speed Dial bugs.