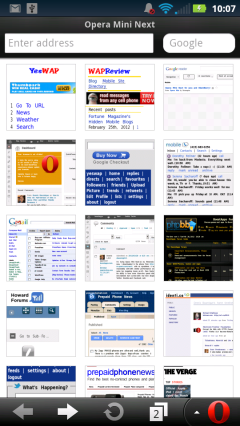 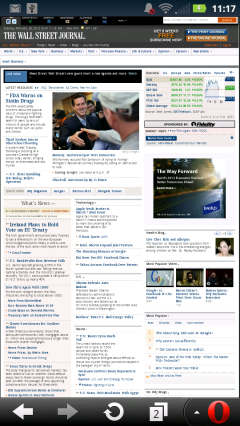 Opera Mini Next on Android: 15 Speed Dials and pixel perfect rendering of the WSJ

Yesterday Opera Software released new versions on Opera Mobile for Android 1.6 and up and for Symbian 3rd edition and later as well as new Opera Mini releases for for iOS (iPhone and iPad), Android 1.5 and up, Symbian 2nd edition and latter, Java ME and BlackBerry OS.

In this post I’m going to focus on the new Opera Mini release. Read on for detailed changelogs as well as my personal impressions.

The new Opera Mini is called Opera Mini 7.0 on iOS, but on the other platforms it’s labeled Opera Mini Next, although the internal version number is 7.0. Opera describes the Next releases as;

Opera Next gives you a sneak preview of what’s to come in future versions of Opera. Advanced users have the chance to test out exciting new features that are still under development for the next release of Opera Mini – and provide feedback on how to make it even better.  Opera Mini Next is not intended for everyday browsing.

Sounds like another name for a Beta. But whatever Opera chooses to call it, there ‘s plenty that’s new in these releases. Here’a a rundown:

New features in Opera Mini 7/Next on all platforms:

Known issues on all platforms:

Hands on with the new releases: I installed Opera Mini Next on a Motorola Photon Android 2.3 phone, a Nokia N8 running Symbian Belle and a low end Motorola WX400 Rambler feature phone.  As is typical with Opera Mini Betas, Opera Mini Next installs along side Opera Mini 6.5 as a new install with default bookmarks and settings.

On the Motorola Photon Android phone, which has a dual-core processor and 1 GB of RAM, Opera Mini has always been very fast and smooth.  Opera Mini Next seems at least as fast and stable as Opera Mini 6.5 on this phone.  I had no problems opening any of the sites I commonly use. In fact the browsing experience between 6.5 and Next seems identical.

What is noticeable are the Speed Dial changes.  I love having more Speed Dials as there about 15 sites that I visit almost every day. In Opera Mini 6.5 the nine Speed Dials didn’t fill the start screen in portrait mode and had an ugly configuration with one row of five and another row of four.

However I found the known issue with Speed Dials moving around pretty annoying. To make matters worse, no only did the order change but I also had a couple of Speed Dials  disappear and another one duplicate itself. These unwanted changes also propagated to my Opera Mini 6.5 and desktop Opera installations, including deleting a couple of my most used Speed Dials on both.

After some experimentation, I think the Speed Dial problems are related to having Opera Link enabled on both Opera Mini 6.5, which is limited to 9 speed dials and on Opera Mini Next. I finally got my Speed Dials syncing perfectly between the Photon and Opera Desktop by doing the following:

After doing the above drill, all my desktop Speed Dials appeared in Opera Mini Next on the Photon in the correct order. I can delete, add and move Speed Dials on phone and have the change pushed to the desktop and vice versa.

With the Speed Dial issue sorted, I’ve switched to using Opera Mini Next as my main browser on the Android phone.

Not so on my N8 Symbian phone where Opera Mini Next has a rather severe fault. If I enable Opera Link the browser locks up and has to be killed with the Symbian Task Manager. As I have close to a hundred bookmarks and rely on Opera Link I’m sticking with Opera MIni 6.5 on Symbian until this issue is resolved. 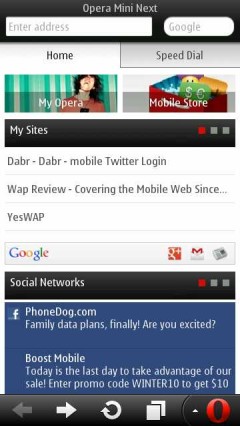 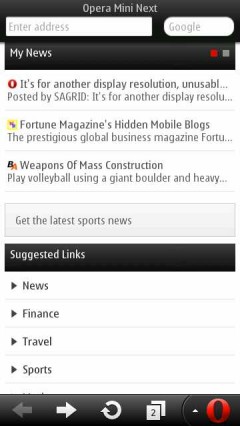 I did play around with the new Smart Page feature.  It’s divided into six parts (images above). Top to bottom they are:

I’m sure some people will find the Smart Page useful but for me it just duplicates the functionality of other sites and services that I use and prefer (real time push email alerts for Twitter DMs and mentions and Facebook wall posts, Google Reader for Feeds, and the WapReview Mobile Directory and Google for site discovery). The Smart Page does give Opera a lot more real estate for sponsored links and if that helps keep Opera Mini free, fast and bug free, I’m all for it. If you don’t want to see the Smart Page you can disable it by setting Home Page to Off on the Advanced Settings screen.

Opera Mini Next on the Motorola WX400 feature performs about the same as 6.5. Which is to say that it works far better than it has any right to on such an underpowered device. Scrolling is quick and I was able to open pages in up to four tabs before UI response started to get slugish. There are however a couple of bugs that were present in earlier Opera Mini versions and are still found n this one:

Key mapping issues are very common with generic Java ME apps on many phones. The Java ME specs don’t specify mappings for keys like Shift, Fn or even the Dpad arrows and OK button and every vendor seems to use different key codes for these. Opera Mini actually gets more of the mappings right on the WX400 than most apps. 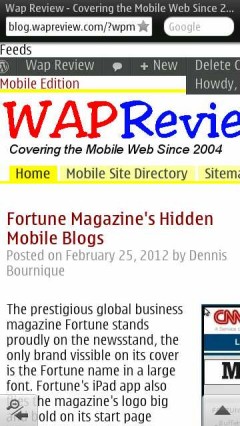 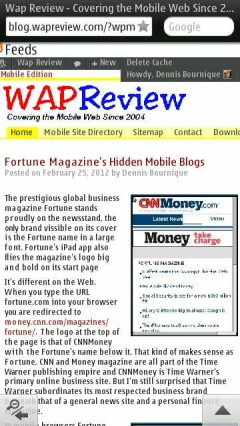 The text wrap toggle which was in Opera Mini 6.5 on other platforms has been added to the Java version.  When text wrapping is on (the default) text on desktop pages is reformatted so that it fits the width of the screen (image above, left) when zoomed in and no longer flows around images. With text wrap text on, flows around images and fills the page’s original column width (images above, right). Turning text wrapping off is most useful on tablets. On phones the text is often too small to read when wraping is disabled. I’m not sure why this feature was added to the Java ME version as Java phones tend to have very small screens. The one scenario I can think of where it would be usefull is running Opera Mini in Microemulator on a PC to conserve bandwith on a very slow, metered or capped connection.

Opera Mini 7.0 for iOS is available now from the  iTunes App Store

Opera Mini Next for Android is in the Android Market

Download Opera Mini Next for Symbian, Java and BlackBerry from m.opera.com/next/ using your phone browser