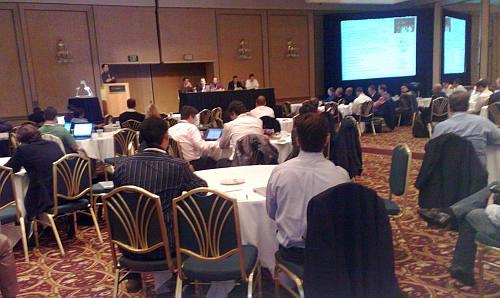 I spent the last two days at the Mobile 2.0 Conference – Silicon Valley. This is my fourth Mobile 2.0 and like the previous three was a first rate event with great speakers and panels and attendance by a global group of mobile entrepreneurs and developers. It was ably organized and run with great attention to detail by Greg Gorman, Mike Rowehl and Peter Vesterbacka with off-site support from Rudy De Waele and Daniel Appelquist .

The event was two days packed with great discussions and presentations covering everything  from the future of mobile to the nuts and bolts of mobile app and web development. Rather than trying to cover the whole conference I’m going to do a couple of posts, each concentrating on one of the highlights for me. I’m going to start with something near and dear to every mobile publisher, monetization.

There was a lot of talk about how to make money in mobile at conference. While application developers can charge for apps and upgrades, mobile web publishers must rely heavily on advertising for revenue.  Unless you are targeting enterprise verticals, it’s almost impossible to get users to for pay for Web content, mobile or otherwise. That means mobile Web sites are generally ad supported. As a mobile publisher I found the “What Have We Learned in Mobile Advertising? ” panel particularly interesting. It was moderated by Skyfire’s Raj Singh and featured panelists from Admob, AT&T, Yahoo, Velti and Smaato.

It’s never been exactly easy to survive on advertising revenue and the recession has made matters worse. I personally witnessed a huge drop in ad revenue from my mobile sites starting in the middle of 2008.

Things seem to be slowly getting better. My site’s CPM (advertiser speak for “cost per thousand impressions” – which translates to earnings per thousand for publishers) has been creeping up this year. The upturn was confirmed by Admob’s Ali Diab who said that the ad network has seen CPM rising across its publisher base recently.

While CPM might be up I’m sure that every publisher would love to earn more. The panel several suggestions.

Interesting stuff.  I’ve done a bit of testing on might sites and found that image ads tend to work better than text ads.  A single ad at the top of the page performs nearly as well as multiple ads and I suspect it’s more palatable to users.  I tried five different ad networks and found that they all suffer from  low fill rate at times and in certain geographical areas.  I’ve created my own crude mediation layer that tries one network  and checks to see if it actually delivered an ad and tries another network if it didn’t.  I think I’m going to try Smaato  and see if its results can beat my homegrown solution.

One thought on “Mobile 2.0 – Advertising Tips for Mobile Web Publishers”