Update: These issues were fixed in Opera Mini 5 Final 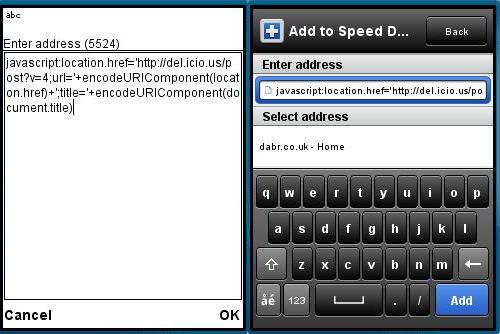 The latest beta of Opera Mini 5 is my new browser of choice. On my Nokia N95-3 it’s fast and stable and offers great rendering and a best in class feature set including tabbed browsing, bookmark synchronization and a choice of desktop or fit to width formatting.

But I’m also a big user of bookmarklets, snippets of JavaScript stored in a browser bookmark.  Bookmarklets provide all sorts productivity enhancing features. I use them  to post the current page to Delicious.com, get a Google translation of  pages in languages I can’t read, add a feed to Bloglines, highlight all the links on a page with a yellow background and a lot more.  I’ve created a page at  o.yeswap.com with over 50 tested in Opera Mini bookmarklets that I’ve written, found on the web or that were submitted by WapReview readers.

Users on the Opera Mini forum have reported numerous issues with bookmarks and bookmarklets in Beta 2.

I’ve reproduced two of the issues, both of which I’ve found workarounds for.

Issue 1. Bookmarklets in Speed Dials generally don’t work. If a bookmarklet in a Speed Dial loads a web page, the stored bookmarklet address gets changed to the address of the page loaded. The screenshots show what happens.  The top two show the “Add to Delicious” bookmarket as it was keyed.  The bottom two show what it looks like after it’s saved and Opera Mini corrupts it.

Issue 2. If an existing bookmarket is edited in any way, even just changing its title or moving it to a different folder “http://” gets prepended to the JavaScript URI making it invalid. This seems to happen regardless of whether you edit the bookmarklet in Opera Mini 5 or edit on the desktop and let Opera Link synchronize the changes to Opera Mini. 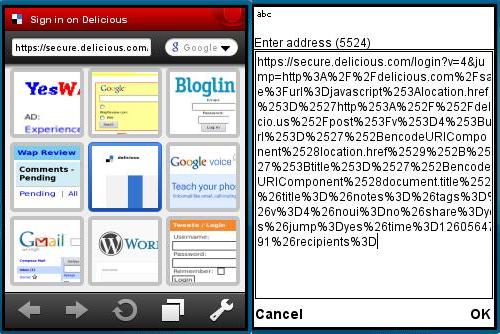 You can still use bookmarklets in Opera Mini 5 Beta 2, but you need to be very careful how you create and edit them.  I recommend:

Don’t use bookmarklets in Speed Dials.  Put all your bookmarklets in the Bookmarklets folder instead. It’s annoying to give up the convenience of two keypress access to your favorite bookmarklets.  To ease the pain, start the titles of your most used Speed Dial bookmarklets with an underscore when you recreate  in Opera Mini’s bookmarks folder.  That way they will sort at the top of the bookmarks list and you can get to them with only a few more clicks than if they were Speed Dials by using the # + 5 shortcut to Bookmarks.

Don’t edit bookmarklets after initially saving them.  It’s OK to edit the title or bookmarklet address when first adding it but editing a bookmarklet after it has been saved will corrupt it.

If all this sounds like more trouble than it’s worth you can always stick with Opera Mini 4.2 until  the next Opera Mini release. Opera Mini 5 is a Beta and bugs are to be expected. The bookmarklet bugs have been reported and I expect the Opera development team to fix them them before the final Opera Mini 5 release. Also Opera Mobile 10 seems to be free of the bookmarklet corruption bug providing a good alternative on supported phones.