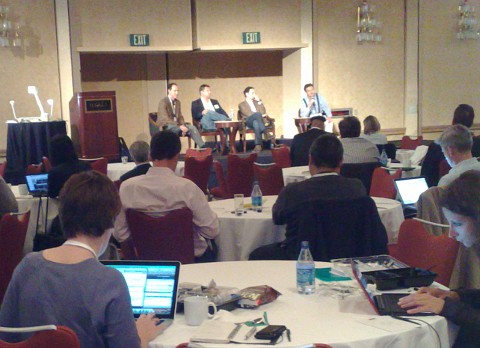 Yesterday’s session of the Mobile 2.0 conference was dubbed the “Business Day“.  The focus was on where the mobile industry is headed and how startups, mobile publishers  and other entrepreneurs can profit from the rapid cycle of  that has characterized mobile since its infancy.

It was a long day with over a dozen presentations and panels.  Rather than trying to cover every one of them which would make for a very long post, I’m going to focus on the one area that I found most interesting, dramatic changes in the mobile world that coming not from North America or Europe but from China, India, Indonesia and Africa. 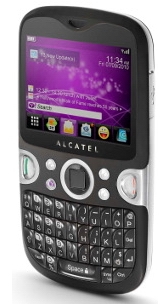 Yahoo VP of Product Management Irv Henderson revealed the existence of a “Yahoo phone” which is now available now in Indonesia. The Alcatel branded Yahoo One Touch Net is a mid-range feature phone with a QWERTY form factor resembling a BlackBerry.  It has a sub $100 unsubsidized price and is made by Hong Kong’s TCT Mobile Limited , a join venture between Alcatel-Lucent and TCL Communication of China. The Yahoo Phone uses the Opera Mini Browser and runs Java ME games and apps. It has  a 2MP camera, Bluetooth, 2.5G (Edge) connectivity and an optical track pad. There are apps or links for Yahoo Mail, Messenger, Contacts, Calendar, the Yahoo Homepage, Yahoo Search with Voice, Yahoo Social Pulse and Flickr. That’s a lot of bang for the buck.

According  to Henderson, the phone’s low price  is largely due to the use of a MediaTak chipset. Taiwan based MediaTek, which Henderson called a hugely disruptive force in the industry, has grown into the second largest mobile chipset company in the world after Qualcomm.  The company has just released a low cost  Android chipset and associated firmware that Henderson predicts will result in sub $150 Android phones by mid-2011 and sub $100 smartphones within two years.  This will put tremendous pressure on other major mobile chipset vendors, Qualcomm, TI and Ericsson, who may find it difficult to compete with MediaTak on price, features and time to market.

MediaTek’s chipsets have lowered the barriers of entry into the phone manufacturing business as well. Chetan Sharma described how Nokia’s once dominant position in the Indian market is being eroded by local brands like Micromax which offer inexpensive devices with unique features for the Indian market. Chetan gave the example of a Micromax phone that offers exceptionally long battery life, 17 hours of talk time and 30 days of standby. That feature is a boon to the many in rural India who do not have electricity in their homes and pay a vendor with a bicycle mounted car battery  to charge their phones by the hour.  Competition from Micromax and other Indian and Chinese handset OEMs has cut  Nokia’s Indian market share by 15% in 18 months.

Another story that’s not new but continues to amaze is the rapid growth of mobile based financial services, particularly in Africa.  North America continues to struggle to come up with a standard for NFC based mobile payment systems, but in Africa operators,  NGO’s and private investors have built a number of thriving mobile payment  systems. Dubbed “Mobile Money’ these systems let users treat their pre-paid mobile  balance as a bank account and use it purchase goods and services and send money to individuals. Kenya mobile operator Safaricom’s M-PESA is the largest such system with over 12 million users. Using M-PESA, subscribers can send a person to person payment with a text  and make deposits,  withdrawals and purchases  at over 14,000 retail stores. Mobile Money turns the phone into a savings account and a debit card.  It’s used as the basis or other financial services as well. Mobile payment consultant Menekse Gencer gave the example of a seed company,that lets farmers buy seed with mobile money and for a small additional fee provides crop insurance.  She also mentioned a hospital that allows Mobile Money users to purchase health insurance and lets expectant parents cover the cost of the baby’s delivery on an installment plan.

There’s a lot happening in mobile today that isn’t coming out of Silicon Valley, Japan or Europe. While we in the West tend to focus on the next superphone and newest OS release change is coming from unexpected quarters. The Micromaxes and MediaTeks of the world are driving advanced mobile capabilities to lower and lower price points, something that I believe will have a profound effect on the mobile hardware industry. Similarity, look for disruptive innovation in mobile services, like Mobile Money, driven by local needs around the world.

One thought on “Mobile 2.0 Business Day – The Yahoo Phone and Innovation From Africa and Asia”