I attended the Mobile 2.0 Developer Day in Mountain View today. It was the sort of great event I’ve come to expect from the Mobile 2.0 team of Gregory Gorman, Mike Rowehl, Daniel Appelquist, Peter Vesterbacka and Rudy De Waele,  a fast paced day filled with lively presentations and panels. Mobile 2.0 is relatively unique  among mobile events in being a grass roots operation organized by people working in the mobile field or as Daniel Appelquist, put it “By industry professionals for industry professionals.”

In contrast to last year’s event which was largely app focused, today’s had a strong emphasis on mobile Web based tools and content. 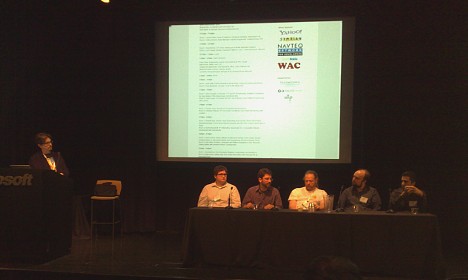 One of the better presentations was the panel on mobile browsers. It was moderated by Vodafone’s Appelquist and featured representatives from Mozilla, Google, Opera, Microsoft and the W3C.

There was a surprising amount of agreement from the panelists that the goal of  browser vendors was enabling rich webapps across all platforms.

One way that is happening is that browsers are gaining access to device properties and data like the camera and location.  Android, BlackBerry and Apple led the way by bringing the HTML5 geoloacation API to the browser. The trend continues, the next WebOS release will add geoloction support to Palm’s browser and Microsoft’s Joe Marini promised that a future version of Mobile IE would also support location. In the same vein, Opera’s Charles McCathieNevile hinted that Opera was working on giving Opera Mini access to the camera and accelerometer on some platforms.

Building rich experiences in the browser shouldn’t be limited to high end devices either. Opera’s McCathieNevile noted that the global marketshare of the iPhone, Android and all smartphones is quite small  and that most of the world is using low end devices. He proposed  a mobile first approach starting with something that works well on basic devices and then progressively enhancing it by adding additional features on the more capable platforms.  What’s really needed to make this happen is a framework or toolkit that makes progressive enhancement easy enough that developers will actually use it.

Continuing the web emphasis there were presentations on mobile JavaScript frameworks; JQTouch, Widgetbox, SproutCore and Sencha Touch. All target primarily the the iPhone and Android 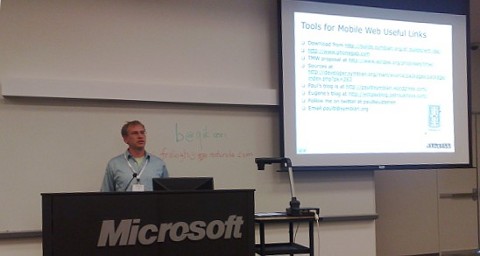 Interest in mobile web technologies isn’t limited to the browser either. Web Widgets are quite big on Symbian and are also available on BADA. Wai Seto demonstatated using Nokia’s WRT plug-in for Aptana Studio. Paul Beusterien showed off the Symbian Foundation’s Tools for the Mobile Web which can be used with PhoneGap to build cross platform apps for the iPhone and Android that also run as WRT Widgets on Symbian. Vidhya Gholkar from the Wholesale Applications Comunity (WAC) promised that the operator led consortium’s cross platform would standardize widget implementation, deployment and distribution across all platforms including feature phones.

All in all an exciting time to be a mobile web developer and proponent.  I truly believe that it’s only a matter of time before web apps become as dominant on mobile as they are on the desktop.  It’s starting to happen, driven by better browsers and tools. The trend will accelerate has developers increasing realize the frustration of cross platform local app development and the power and flexibility of webapps.

One thought on “Mobile 2.0 Developer Day – The Rise Of The Web”