I’m not actually AT CES but I’ve been following it on the blogosphere.  The big mobile announcement is of course the Palm Pre.  It’s the first device running the  long awaited (and twice delayed) Linux based, next generation Palm platform, which is called WebOS rather than Nova.  Very iPhonesque in appearance,  but with a slide out QWERY keyboard, the Pre features a multi-touch UI.  The few people who’ve been allowed to play with it have  found the user experience be quite slick and intuitive.  There’s address book and calendar integration with Google, Microsoft Exchange and Facebook!  and treaded messaging which can show  SMS and IM messages in the same thread.

Initially the Pre will be a Sprint exclusive so it’s CDMA/EVDO Rev A. (plus WiFi). Palm has said that there will be a GSM/HSPA version eventually.  No details on pricing although Palm’s CEO supposedly suggested that it would be priced the same or even higher than the iPhone.  Availability in “The first half of 2009”.

Palm’s survival depends on the Pre’s success.  In the last month or so Palm and its boosters have been hinting that this Phone and OS will offer real breakthroughs in innovation and usability.  Now that it’s been announced, there doesn’t seem to be anything revolutionary in the form factor or specs (3.1″ 320 x 480 screen, GPS, 8MB RAM, accelerometer, 3.5mm headphone jack).   If the Pre is the game changing device Palm needs, the magic will have to be in the software and the user experience. Here’s hoping it is, as a long time Palm user, I’m rooting for them. Don’t know about that name though. “Pre” what?

There has been a lot of Sprint-dissing in some of the blog posts and comments I’ve seen but I don’t thing it’s such a bad thing.  Sprint is on shaky ground financially but their 3G network is actually very good, much better in speed, stability and footprint than AT&T’s overloaded and flaky one.  The Pre will show well on Sprint.  Even if Sprint does fail, someone will acquire  their customers, network and nationwide spectrum licenses.  CDMA is essential to success in the US (something Symbian has yet to figure out). Of course Palm needs to get a GSM model out within a few months of the initial launch, you can only sell so many phones using technology that only works in North America.

I’m more concerned with the development environment.  There are no development tools yet but according to CNET, apps will be written in HTML, Javascript and CSS.  That sounds like Web Apps and Widgets only.  No support for native apps or even Java and no way to run legacy Palm apps.   In today’s marketplace a high end device like the Pre needs to support 3rd part development of applications that can access hardware features like location, bluetooth, speakers, microphone, filesystem, phonebook and calendar. The browser is Palm developed and based on the WebKit core. Palm has supposedly given the browser, and  the widget runtime, JavaScript  hooks in to all those phone features.  That’s not a bad idea, it’s exactly where all the new widget platforms like BONDI, Nokia Web Runtime and the Access and Opera Widgets are headed. It looks like Palm might get their first.  Palm desperately needs developers to quickly create an application library for the Pre and developing Ajax widgets should be faster and easier than native applications. If  the Pre sells and Palm and Sprint don’t place signing and certification roadblocks in the application distribution process, developers should flock to the  platform like they did to the original Palm Pilot.

Blogosphere reactions to the Pre are mostly favorable, here are a couple of my favorites on the PRO side:
Palm is innovating again –  Fabrizio Capobianco
Palm Pre Preview: Simply Amazing – Gizmodo

Some dissenting opinions:
Further Thoughts on the Palm Pre; Still Doesn’t Look Enough – Ewan Spence
Can Pre Save Palm From Being Put Out to Pasture? – Om Malik

In other mobile related CES news, Nokia announced three new phones for the US market. The 7510 S40 6th edition clamshell  on T-Mobile, a US spec E63 and the 1006, an entry level AWS CDMA candybar.

The E63 is getting the most press thanks to the very attractive list price of $279, unlocked and unbranded.  It supports AT&T’s 3G frequencies, but unfortunately NOT T-Mobile’s.  I think that was a mistake on Nokia’s part, T-Mobile users have a very limited selection of 3G smartphones, currently just the G1.  Nokia could have sold a ton of E63’s to T-Mobile customers if it supported the 3G at 1700 mHz that the carrier uses. 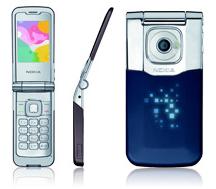 At first glance the Nokia 7510 is just another Nokia S40 feature phone without 3G.  But it is also one of the first phones with Nokia’s S40 version of the WebKit browser.  I’ve never been too impressed with WebKit on S60 (stability issues,  no fit-to-width,  no page Up/Down keys and a crippled implementation of tabbed browsing)  but it’s a whole lot more powerful than the standard S40 browser. S60 Webkit has good JavaScript and CSS  support and can even play some Flash videos in the browser.  I’m hoping Nokia kept the good stuff and maybe added some of the missing features when they ported Webkit to S40. The T-Mobile 7510 is also one of the first S40s with Nokia Maps built in. And it has WiFi with support for T-Mobile’s UMA,  which allows seamless voice call switching between WiFi and GSM.  All in all a pretty good feature set for a mid-range 2G phone. Let hope that T-Mobile hasn’t crippled the 7510 to block 3rd party Java applications like gMail, Google Maps and Opera Mini like they usually do with their feature phones.

Even the lowly 1006 is significant as it is a real CDMA S40 phone from Nokia in a long time.  For the last few years Nokia’s CDMA phones have actually been rebranded Pantech models.  It looks like Nokia is reentering the CDMA market.  Now how about a CDMA S60?

According to MobileBurn, Nokia has also killed the WiMAX version of  it’s N810 tablet, which was just launched four months ago.  Seems like a strange move, WiMAX is just getting started and the WiMAX N810’s development costs are already spent.  Why kill it now rather than waiting to see if WiMAX makes it.  I suspect that the N810 either has some serious, expensive to fix issues or Nokia knows something about WiMAX’s future that we don’t.

Skype launched “Lite” clients for Android and Java ME. Skype Lite uses  your mobile  data and voice channels not WiFi, so even Skype to Skype calls will not really be free.  But it is another way to make cheap international calls and IM’ing shouldn’t cost anything if you have unlimited data.  It also means you will be able to answer calls to your Skype number using your mobile for the cost of a local call. However the calling features are only supported in Australia; Rio de Janeiro & Sao Paulo, Brazil; Denmark, Estonia, Finland, New Zealand, Poland, Sweden, the United States and the UK.  Skype Lite for Android is already in the Android Market. The Java version is also available now for over 100 handsets from Nokia, Sony Ericsson, LG, Samsung and Motorola.