s*com is a U.K. based recruitment agency specializing in aviation, defence, engineering, government, IT and telecoms jobs. Usability of s*com’s mobile Web site is somewhat hampered by the large banner images and several screens full of boilerplate text touting s*com’s benefits that job seekers have to scroll through to reach the search form. An advanced search form dispenses with the verbiage and allows results to be filtered by industry, permanent/contact and U.K./Rest of the World. Source: Mobility.mobi Filed in: Wap … Continue reading →

Wyndham Hotels Group, the worlds largest hotelier, has launched ten mobile sites, one for each of Wyndham’s brands that operate in the U.S. I have my doubts about the multiple site strategy. After a hard day on the road I just want to find the nearest available room at a price I can afford.  I could care less whether it’s a Days Inn, Super 8 or Microtel.  I certainly don’t want to visit ten sites.  Instead I would probably use … Continue reading →

Zillow.com has gone mobile with a site at mobile.zillow.com.  Zillow is a familiar name for house hunters in the US. It’s s a real estate search site that was started by a couple of Microsoft and Expedia alumni and has really taken off,  thanks to its unique interface that makes obscure public records of home sales and assessments highly available and accessible to anyone. The way Zillow works  is that you enter any US residential address and get back you … Continue reading →

Quick, what’s the third largest social network (after Facebook and MySpace) in the world based on traffic?   According to both Comscore and Alexa, it’s Hi5, which has 80 million members.  Although it’s based in San Francisco, less than 7% of Hi5’s traffic comes from the US. Available  in 37 languages and dialects, it’s the leading network with Spanish speaking users worldwide and is hugely popular in South America, Africa and Thailand.  Hi5 is also one of the fastest growing large social … Continue reading →

Vanguard Funds is a large US mutual fund house specializing in no-load, low cost index funds.  I like the company but I’m disappointed by their mobile site at vanguard.mobi (you will need a mobile browser to see the mobile version). There isn’t much content and usability is not as good as it could be. Vanguard.mobi can be used by anyone, whether they have a Vanguard account or not, to view the current value of four major US market indexes and … Continue reading → 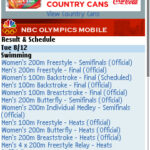 If you use an advanced full-web browser like S60WebKit or Opera Mobile you have probably noticed that text size varies widely from site to site. It’s not unusual to encounter sites where the text is quite hard to read when the browser is set to it’s default zoom level. A good example is the NBC Olympics site (top image). The text in the screenshot is probably readable if you are viewing this on a PC, but try using your browser’s … Continue reading → 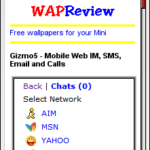 The distinction between the mobile web and the “full” web is getting fuzzy. We have millions of phones running full-web browsers such as Opera, Safari, S60Webkit and NetFront that can display almost any web site.  Not only can these browsers handle JavaScript but the latest S60WebKit can play Flash .flv videos in the browser and it plus Opera Mobile 8.65 and 9.5 do a decent job with AJAX pages. Web developers should be asking “Which version of my pages should … Continue reading → 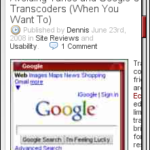 The iPhone has done so much to generate interest in using the web on phones with its big, beautiful screen and powerful browser with full JavaScript and CSS support.  But the iPhone feature that seems to excite people the most is “Pinch to Zoom”.  Apple has given the  UI, including the browser, a multi-touch interface that lets you use two fingers to zoom; you slide your fingers apart to zoom in and see more details, slide them together to zoom … Continue reading →